Ogilvie Fleet has reported a huge growth in demand for Personal Contract Hire (PCH) from drivers giving up company cars as well as from the wider employee community across its customer base. 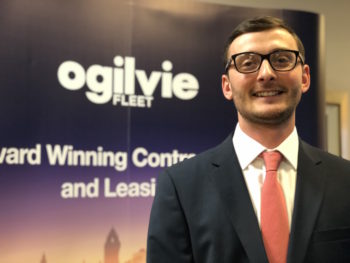 The leasing and fleet management specialist launched a PCH solution last year and has now introduced it at 26 businesses collectively employing almost 150,000 employees.

Richard Jessop, head of salary sacrifice, who has spearheaded the growth of PCH, as well as salary sacrifice at Ogilvie Fleet, said year-on-year increases in company car Benefit-in-Kind tax coupled with uncertainty surrounding what the tax regime would look like from April 2020 pending a government announcement expected later this year, was driving demand.

He said: “The general trend is for our corporate customers to offer perk company car drivers a cash allowance option. Ogilvie Fleet can meet the vehicle demands of those drivers by offering a PCH solution, which removes the benefit-in-kind tax burden for them and also provides them with a reputable source for cars. Equally employers have no contractual risk in employees opting to fund a car through a PCH agreement with a known company with which they already have a business relationship.

“Simultaneously, Ogilvie Fleet is witnessing many employers extend the benefit of a PCH solution to their entire workforce who do not qualify for a company car by virtue of their job. That is proving to be a significant growth opportunity because invariably a business has more employees than just those opting for a cash allowance instead of vehicle.”

The firm’s observation that drivers are increasingly opting out of company cars due to tax uncertainty is backed up by latest quarterly leasing figures from the BVRLA, which show that in Q3 2018, business car leasing fell 7.2% while personal contracts continued to rise with a 19% increase, furthering a trend seen since 2016.

Richard Jessop at Ogilvie also said that salary sacrifice remains a key solution in the firm’s product portfolio with many customers offering ‘perk drivers’ the option of a company car, salary sacrifice or PCH.

“Prior to OpRA we expected salary sacrifice demand to be huge. However, the perceived complexity around the rules means that by comparison PCH is seen by many employers and employees as straightforward to understand, simple to administer and generally a breath of fresh air,” he continued

“Nevertheless, there remains a desire among employers to offer ‘perk’ drivers a choice that embraces company cars, salary sacrifice and PCH. Our customers are ‘pick ‘n’ mixing’ the three products from our portfolio to meet the requirements of their employee community and for many salary sacrifice remains a popular and viable solution.”

Looking to the future, Jessop added: “The marketplace continues to evolve and employers want to offer their employees a broad range of vehicle solutions as part of an overall flexible benefits package. Other innovative funding solutions will, I believe, be developed that enable vehicle leasing providers such as Ogilvie Fleet to deliver car solutions that negate the requirement for ‘perk’ drivers to pay benefit-in-kind tax as it becomes ever-more costly.”

Previous: RAC and Autofirst collaboration brings ‘biggest independent garage network in country’
Next: The cost to the car market of a no-deal Brexit