The Health and Safety Executive is being urged to bring the safety of those who drive for work higher up its priority list – part of a seven-point manifesto published by IAM RoadSmart as it urges politicians to address road safety. 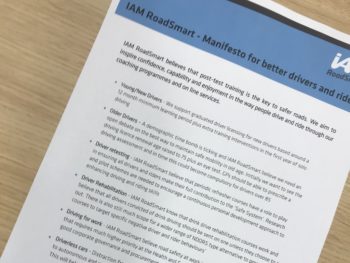 Published ahead of the general election and manifestos from all the political parties, the IAM’s own document calls for a focus on road safety and saving lives to return to the top of the political agenda as it points to recently published Department for Transport stats showing more than four people were killed on UK roads every day in 2018 (1,784 in total); a number that has barely changed for the last seven years.

The organisation is urging politicians to look at seven areas, including road safety at work; a critical health and safety issue that requires much higher priority at the Health and Safety Executive, according to IAM, which adds that at-work driver safety should be at the core of good corporate governance and procurement practice in the private and public sector.

The organisation is also calling for the road safety focus to be put onto young drivers (who remain the biggest at-risk group for serious and fatal crashes), a more comprehensive plan for managing an older population and the need to keep them mobile, plus refresher courses to ensure drivers’ skills remain at a high standard, and a stronger commitment to rehabilitation courses for driving offenders. The IAM also says greater thought should be put into the legislation on driverless cars and a bigger push towards safer motorcycling as a solution to increasing vehicular congestion.

Mike Quinton, IAM RoadSmart’s chief executive officer, said: “The UK has one of the best road safety records in Europe, but still 1,784 people a year are killed. We believe by working together with government and the road safety ‘industry’ we can deliver a step change in road safety and significantly reduce the fatalities and injuries which occur daily on our roads.

“We will be writing to politicians to highlight our manifesto priorities and urging them to be instrumental in the road safety debate when the new government is formed.”