Honda has revealed its new Civic at the company’s UK manufacturing base in Swindon ahead of its European debut at the Paris Motor Show this month. 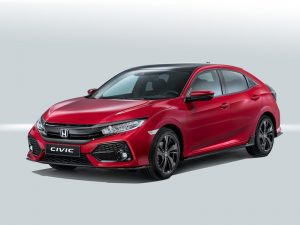 Built on an all-new platform, the new hatchback – which will later be joined an estate model – is 30mm wider and 130mm longer than the previous model while sitting 20mm lower, and brings extra space for front and rear passengers. Boot space remains class leading at 478 litres – up by one litre compared to the previous model, and the Civic also offers a low sill height and wide boot opening along with a hidden underfloor compartment.

Driving dynamics are boosted by all-new suspension, a lower centre of gravity and a boost in body rigidity, while the driving position has also been set nearer to the road. The new model is also 16kg lighter than that of the previous generation Civic, while exhibiting 52% greater torsional stiffness.

Design highlights include new larger and wider wheels along with a long wheelbase and short overhangs. Inside, there’s a completely new instrument display layout with a new seven-inch colour TFT-LCD Driver Information. The new Civic is available with the second-generation of Honda’s infotainment and connectivity system, which offers enhanced intuitive operation and full smartphone integration via both Apple CarPlay and Android Auto.

Engine line-up from launch debuts two new Honda petrol VTEC engines – a 127bhp 1.0-litre three-cylinder and a 180bhp 1.5-litre four-cylinder. Both engines will be available with either a newly-designed six-speed manual transmission or a CVT automatic. The line-up will also gain an updated 120bhp version of the current 1.6-litre diesel towards the end of 2017 – emissions have not  been announced yet as the engine has not been homologated.

The new Honda Civic is due from early 2017. Pricing will be announced closer to the Civic’s launch at the Paris Motor Show at the end of the month.