Honda has revealed the 10th-generation Civic hatchback, as the first Swindon-built production models are shipped to the North American market. 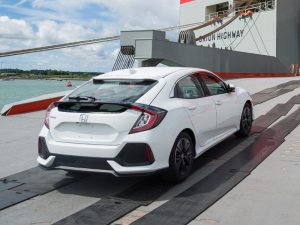 The 10th generation Honda Civic Hatchback will be available in Europe early next year.

Previewed with a concept car at the Geneva Motor Show this year, the hatch is longer, wider and lower than the car it replaces, and features larger, wider wheels on a longer wheelbase. Honda is claiming class-leading cabin and luggage space.

It also marks the first time that Honda has produced Civics for North America at its plant in Swindon. The five-door hatchback will join the already-available saloon version in the United States and Canada, a model which is built at the carmaker’s plant in Ontario.

Sales will start in the UK early next year.