Highways England has been referred to the Crown Prosection Service (CPS) for a possible charge of Corporate Manslaughter following the death of a 62-year-old woman on a stretch of smart motorway. 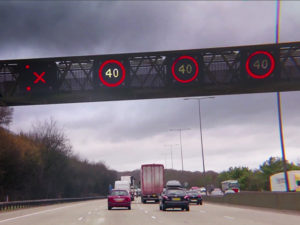 Nargis Begum was waiting for help near her car on the M1 after it broke down on a stretch without a hard shoulder. She was killed after another car hit her Nissan Qashqai and it ploughed into her.

In the pre-inquest review hearing held yesterday (11 February 2021), the coroner decided to refer the case to the CPS to consider a charge of Corporate Manslaughter against Highways England.

At a previous hearing, the coroner had heard there was a total of 22 minutes and 36 seconds between the breakdown and lane closure warnings being displayed. The warning was actually activated six minutes after the collision occurred. This was due to only having eight people watching 450 cameras within the Yorkshire and North East region.

A Highways England spokesperson said: “Our deepest sympathies are with the family of Mrs Begum, and all those affected by this tragic incident.

“Although we do not believe Highways England has committed any offence we will of course cooperate fully in any investigation. Every road death is a tragic loss of life and we are determined to do all we can to make our roads as safe as possible.”

Edmund King, AA president, said: “This is a significant moment for ‘smart’ motorways and highlights many failings, previously raised by the AA, that should have been spotted before the first fatalities, and clearly need urgent action.

“The coroner feels there are significant concerns in this case which require further investigation.”

He added: “We feel the risk of death would be reduced with more emergency laybys and the extensive use of radar to help pinpoint incidents.

“We will await the CPS conclusions in due course, but this decision will once again raise serious questions regarding the permanent removal of the hard shoulder.”

Highways England had already started rolling out an 18-point package of measures as the result of a review announced by the Department for Transport into smart motorways. The measures include substantially speeding up the deployment of radar-based Stopped Vehicle Detection (SVD) tech, which can detect stationary vehicles much faster.

It’s believed that the Transport Secretary has called an urgent meeting with Highways England to discuss progress on the plan. This also follows a separate case over the deaths of two people on a smart motorway section of the M1 motorway. The inquest, held 18 January 2021, concerned the deaths of Jason Mercer and Alexandru Murgeanu, who died when lorry driver Prezemyslaw Szuba crashed into their vehicles near Sheffield on 7 June 2019.

The inquest saw coroner David Urpeth record a verdict of unlawful killing and call for a smart motorway review, saying that smart motorways without a hard shoulder carry “an ongoing risk of future deaths”. It was also suggested at the inquest that the deaths of the two men might have been avoided if there had been a hard shoulder on the motorway.