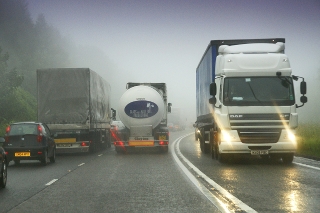 As announced by the government last year, speed limits in England and Wales for HGVs over 7.5 tonnes will rise from 40mph to 50mph on single carriageways and from 50mph to 60mph on dual carriageways.

In response, Gary Rae, campaigns manager for Brake, the road safety charity, said: “We are disappointed that the Government has gone against the advice of road safety groups on this issue. The decision to increase HGV speed limits is short-sighted and runs against work to more effectively manage traffic speeds and reduce casualties on our roads. The relationship between speed and casualties is a proven one, so allowing the largest vehicles on our roads to reach higher speeds more often risks more deaths, serious injuries, and additional cost to the taxpayer.

“The Government itself has admitted that this move will likely have no economic or road safety benefit. It is a move designed to legitimise the dangerous behaviour of those who already break the speed limit while putting the safety of the law-abiding majority second. It sets a dangerous precedent that if traffic laws are persistently flouted; the government would rather change them than enforce them.”

However, the Freight Transport Association (FTA) said the change to HGV speed limits would improve road safety for all road users as the differential between HGVs and other road users has been reduced.

The association added that the changes would allow single carriageway roads in the UK to be used more effectively and safely.

Malcolm Bingham, FTA’s head of road network management policy, said: “This is a move to improve safety for all on single carriageway roads where the 20mph speed differential between cars and trucks can lead to hasty overtaking manoeuvres that sadly often result in casualties. FTA believes that it will benefit industry as it will allow operators to use the additional speed, where it is safe to do so, and gain running cost benefits.”

The current speed limit was introduced in the 1960s, since when lorry technology has advanced considerably. The FTA added that change would modernise an antiquated restriction, which is not matched in most other European countries.

Alan Prosser, head of driver education at the TTC Group, from Telford, which trains 300,000 drivers each year, also said the changes will ensure rules for lorry drivers’ speed limits are in line with other larger vehicles, creating a fairer and more proportionate system.

“Common collisions on our roads involve overtaking manoeuvres and the rear-end shunt. This speed limit rise will lead to a more even traffic flow, less stop starts, and better fuel efficiency,” said Prosser.

He added: "It is important that motorists recognise the varying speed limits that drivers of different vehicle types are legally bound to, and manage this as part of their journey.”

Previous: The Insider: Spec adjusted
Next: 97% of motorists believe motorway services parking should be free