Heathrow’s M25 tunnel could cause ‘years of disruption’

The M25 could be rerouted and gain a tunnel section under plans for expansion at Heathrow Airport. 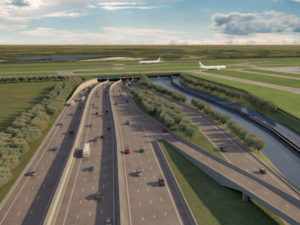 The plans for a third runway could see the M25 rerouted and gain a tunnel section that goes under the runway.

Open for comments in a 10-week consultation, the plans would introduce a third north-west runway for £2.5bn less than previous plans while sticking with the expansion commitments Heathrow has made to local communities.

The airport has now outlined various infrastructure proposals to the public, including a proposed alignment of the M25 that would see it repositioned around 150 metres to the west, and lowered by 7 metres in a tunnel with the runway to go over the top.

However, British Airways’ parent company, International Airlines Group (IAG) called for a detailed risk and cost analysis of its proposed M25 changes, which it said “could derail expansion plans and bring years of disruption on a motorway plagued by traffic jams”.

Following the consultation, the airport’s proposals will then be subject to a second public consultation next year. Parliament is expected to vote on a National Policy Statement in the first half of this year, which will set out the policy framework for Heathrow’s final planning submission.