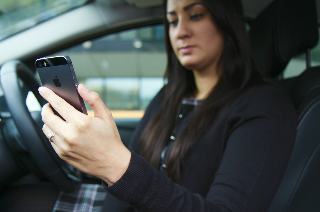 The research, carried out from psychologists at the University of Sussex, shows that drivers who are engaged in conversations that spark their visual imagination are much less able to spot and react to potential hazards. When the drivers involved in the study were asked about a subject that required them to visualise it, they focused on a smaller area of the road ahead of them and failed to see hazards, even when they looked directly at them.

The study was published in the Transportation Research Journal, with the researchers claiming their evidence shows conversations may use more of the brain’s visual processing resources than previously understood.

Previous research has estimated that up to 22% of crashes could be caused by some kind of distraction and drivers who perform a secondary task at the wheel, like using a mobile, are up to three times more likely to crash.

In response to the research Lucy Amos, research advisor for road safety charity Brake, said: “Distracted driving is a major cause behind road crashes; pulling the drivers’ attention away from the road and its potential hazards, potentially leading to fatal outcomes. This new study is only the latest of many which adds weight to extending the existing legislation to cover all mobile phone use within a vehicle, not just the use of hand-held mobile devices.

“We call on the Government to take action and remove the clear and present danger of mobile phones on our roads.”