A complete ban on mobile phone usage while driving – including hands-free operation – is “long overdue and enforceable”, according to Licence Bureau. 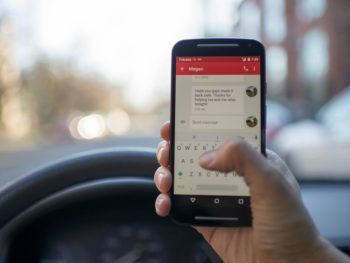 The road risk specialist has given its full support to calls from the House of Commons’ Transport Committee’s call for a clampdown on mobile phone usage, as published in a new report that says the practice of using a hand-held mobile phone or other device while driving “is still troublingly widespread and can have catastrophic consequences”.

Licence Bureau speaks with authority too on the practicalities of outlawing all mobile phone use, including hands-free – the firm is now its fifth year of a complete mobile phone use ban for all employees whilst driving and Licence Bureau’s MD claims the enforcement of such a ban should be easier than many sceptics speculate.

Although MPs in the Transport Committee report acknowledged the difficulties of making hands-free illegal, in terms of fleets running drivers out in the field and also in terms of police enforcement, Malcolm Maycock, managing director of Licence Bureau, said: “It is absolutely the right thing to do – lives are being lost and it is long overdue.”

He added: “Advancements in technology should enable the police to enforce a total ban, assisted by vehicle manufacturers and mobile phone providers.

“Patrol cars already have automatic number plate recognition (ANPR) technology onboard, as well as stolen vehicle detection systems, so why not extend this capability to identify mobile phone use in a vehicle?”

Maycock applauded how mobile phone detection warning signs have been introduced by several police forces across the UK as an education tool. He added that this approach could logically be extended to include camera back-up to identify single occupancy in vehicles.

Licence Bureau’s own no-mobile phone usage policy states “any employees driving on company business must not use any type of mobile phone, including hands-free, whilst driving”. It is also company policy that if any employee calls or receives a call from someone they believe is using a mobile phone whilst driving, that the call is ended promptly.

Licence Bureau also advises its business partners that any of their drivers caught using a mobile phone whilst driving can be charged with “failing to have proper control of their vehicle”, or “careless or dangerous driving” and says those drivers should also be subject to disciplinary action.

“Now is the time to act,” he finished.

Previous: Toyota and Suzuki to take stakes in each other to further alliance
Next: New Thinkware dashcam brings energy-saving features and 4K recording quality