Grey has taken the top spot in the list of the UK’s favourite new car colours for the second year running, accounting for more than one in five new cars (22.6%) sold in 2019. 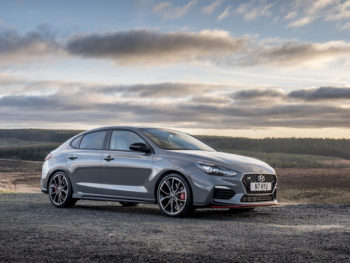 Grey took the top spot for the first time in 2018

The data from the Society of Motor Manufacturers and Traders (SMMT) shows the number of grey cars registered in the year rose 5.3% to 521,273, keeping it in the lead and followed by black or white. As a result, 60.7% of new cars were registered in shades of monochrome last year – with a primary colour not having made the podium since 2010.

Registrations of black cars were down 2.4% and white cars down 4.1%; this compares to an overall 2.4% drop in new car registrations in 2019. 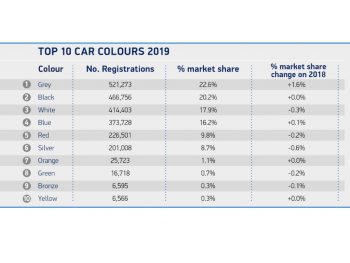 In fact, in line with the new car market decline, most colours saw a decrease in registration numbers, including silver. Despite being in in the top three 16 times in the last two decades, the colour posted its lowest number of registrations for 20 years, down 0.6% to 201,008 models.

Just grey and turquoise increased their numbers in the 12 months, the latter up 29.3% with 2,358 registrations.

Overall, the top 10 was largely unaltered year-on-year, save for the reappearance in 10th place of yellow, which was knocked out in 2018 by beige.