Greater Manchester is to add 48 rapid charging points to its electric vehicle charging network with the help of government funds. 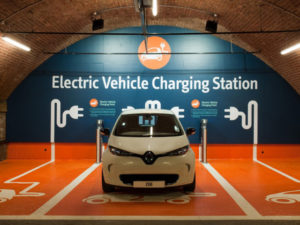 The network currently has 318 charging points and the new rapid charging points – comprising 24 dual bays – will be installed next year after securing funding from the Government’s £40 million Clean Air Plan ‘early measures’ national fund in a move to bring down nitrogen dioxide (NO2) emissions. The region has been in breach of its legal NO2 limits every year since 2011.

The government funding will also be used to raise awareness and take-up of electric vehicles in the region.

Andy Burnham, Mayor of Greater Manchester, said: “Going electric is becoming easier than ever so it’s vital that we have the right charging infrastructure to support demand for greener travel.

“This funding is a step in the right direction, but ultimately I want to see the GMEV network double in size – and everyone playing their part in reducing car-related fumes.”

Nearly 54,000 charging sessions took place in 2017, compared to around 10,000 in 2014, and the GMEV network has charged 2.5 million electrically powered vehicle miles. This has saved 651 tonnes of CO2 emissions and 1,600kg of NO2 compared with the same journeys made in Greater Manchester by petrol or diesel vehicles.

There are 2,234 registered plug-in vehicles in Greater Manchester and, nationally, ultra-low-emission vehicles (ULEV) form 2.9% of all new car sales.