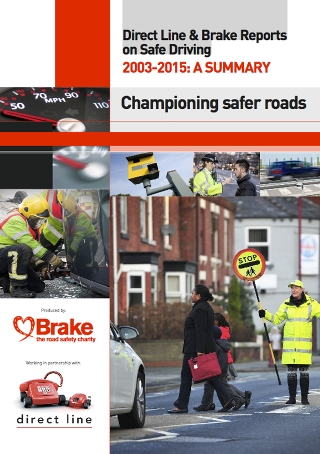 So said road safety charity Brake at its parliamentary reception held at the House of Commons yesterday (14 July 2015) as it challenged the Government to tackle the first annual increase in road casualties of all severities in 17 years.

The call comes as Brake and long-time campaign partners Direct Line Insurance release a report examining UK drivers’ reported attitudes and behaviour in a number of key areas over the past decade, and making recommendations for improvement.

The proportion admitting drink driving has fallen, although a sizeable minority of a third (32%) still admitted driving after drinking any amount of alcohol in 2013, compared with more than half (51%) in 2003.

The overall proportion of drivers saying they use mobiles at the wheel has fallen slightly, with less than half (45%) admitting doing this in 2013, compared with 54% in 2006. However, most drivers who used to use hand-held phones at the wheel appear to have switched to using hands-free phones, which is just as dangerous. Texting has remained a constant issue, and use of internet and apps is an emerging threat to safety.

It’s become less common for drivers to admit speeding overall, but it remains a widespread threat. In 2015, more than half of drivers (57%) admitted speeding, an improvement on 88% in 2004. However, drivers are continuing to admit speeding on urban roads at similar levels, risking the safety of pedestrians and cyclists.

Young drivers have been consistently shown to be more likely to take a range of risks, including speeding and mobile phone use. However surveys have also shown widespread support among drivers for a new ‘graduated driver licensing’ system to improve the safety of new drivers, with 84% in favour of a minimum leaner period.

Brake has also called for:

An effective zero-tolerance drink drive limit (of 20mg alcohol per 100ml of blood) to sever the link between drinking and driving for good.

Greater priority given to traffic policing and increased penalties for mobile phone use and speeding, to pose a stronger deterrent against driving distracted, impaired or dangerously.

A system of graduated driver licensing, to allow new drivers to learn in a safer and more structured environment while less exposed to risk, and help tackle young driver crashes.

A default urban speed limit of 20mph, to cut casualties among the most vulnerable road users and allow people to walk and cycle in their communities without fear.

Julie Townsend, Brake deputy chief executive, said: “We often hear that the UK has among the safest roads in the world. Yet after years of progress in bringing down casualties, figures for 2014 have revealed the first annual increase for 17 years.

“There is far more we can do to make our roads as safe as they can be, where no one must pay the ultimate price for getting around. Global research and experience shows that measures like graduated driver licensing, 20mph limits and a lower drink drive limit are effective in preventing loss of life, and making our streets and communities safer, more pleasant places. We are appealing to the government to respond to the rise in casualties and seize the opportunity of preparing a new road safety strategy, by making clear that ultimately, we should be moving towards zero road deaths and injuries and ensuring everyone can get around without fear or threat.”

To read the Brake and Direct Line report on safe driving, click here.