The Government has launched new proposals for new cycling offences that could see cyclists punished for riding dangerously. 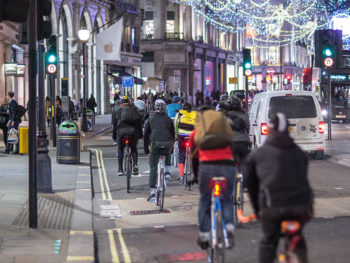 The proposals could see cyclists given similar penalties to causing death by careless or dangerous driving following three pedestrians killed in 2016 and 108 seriously injured, that were caused by cyclists. Additionally, the proposals set out to decide what associated penalties might be.

Cycling and Walking Minister Jesse Norman said: “In recent weeks we have announced a range of measures designed to protect vulnerable road users such as cyclists and pedestrians. These include new measures to combat close passing, training for driving instructors, better collision investigation and £100 million in new investment through the Safer Roads Fund.

“Now we are taking further steps. These include a consultation on new cycling offences, further work on national guidance on cycling and walking infrastructure, and improvements to the Highway Code.

“All these measures are designed to support the continued growth of cycling and walking, with all the benefits they bring to our communities, economy, environment and society.”

In June, the DfT also announced plans for a £500,000 pilot scheme offering driving instructors bespoke training to ensure cyclists’ safety is at the forefront of their minds when they teach new drivers.

However, road safety charity Brake said the proposals didn’t go far enough to address the root cause of the problem.

Joshua Harris, director of campaigns at Brake, said: “Whilst the intentions behind the Government’s announcement are sound, they are trying to fix a fundamentally flawed legal framework. A full review of road safety law is required and frankly long overdue. All too often families are denied justice, with drivers who kill let off with pitifully lenient sentences, and the public endangered through dangerous drivers evading driving bans. The Government must review all road safety law to protect the public and deliver justice for the families of those devastated by road death.”

Government proposals come in the wake of its call for evidence on cycling and walking, which closed at the start of June and gathered more than 13,000 replies and had 250 attendees to national workshops.