Long-awaited air quality plans published by the Government have come under fire for passing on responsibility for tackling air pollution to local authorities. 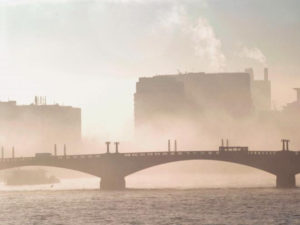 The EU has given a final warning to the UK for failing to address repeated breaches of air pollution limits for NO2. Source: London Assembly

Available for comments until 15 June – with a final plan due for publication by 31 July – the consultation document looks at a targeted scrappage scheme for cars or vans but says “any scheme would need to provide value for money, target support where it was most needed, be deliverable at local authority level and minimise the scope for fraud”.

Instead the plans, published in response to a High Court ruling that put paid to the Government’s bid to delay their publication until after the General Election, put the focus on local authorities to come up themselves with measures to tackle nitrogen dioxide in towns and cities where action is needed, with the Department for Environment, Food & Rural Affairs (Defra) saying: “Local authorities are already responsible for improving air quality in their area, but will now be expected to develop new and creative solutions to reduce emissions as quickly as possible, while avoiding undue impact on the motorist.”

This can include the development of clean air zone proposals for vehicles not meeting Euro 6 emission standards for diesels (Euro 4 for petrols), with the option to introduce charging, although Defra added that the Government believes that charging zones should only be used where local authorities fail to identify “equally effective alternatives”.

Advice for councils on deploying clean air zones is set out in new Framework guidelines, including vehicle standards and other requirements to be followed for councils going down the charging route – local authorities can also choose whether to apply charging to buses, coaches, taxis and private hire vehicles or to extend it to HGVs and even vans and cars. Band levels for charging are yet to be announced.

The framework, which takes into account responses to the previous implementation of Clean Air Zones in England consultation, also sets out advice on minimum requirements for clean air zones, measures on optimising traffic management such as speed bumps, and working with businesses to recognise and incentivise action as well as accelerating ultra low emission vehicle take-up, including through councils buying ULEVs themselves and encouraging local transport operators to do the same.

Local authorities will also be able to decide on whether to implement government-funded retrofit schemes, which are currently anticipated to support modifications to buses, coaches, HGVs, vans and black cabs.

Friends of the Earth branded the plans as “woefully inadequate, with a breath-taking lack of detail”. Air pollution campaigner Oliver Hayes added: “”If reports are true and these plans have been watered down because of the general election, ministers will have shown a shocking disregard for protecting people’s health.

“Every day of inaction on air pollution costs lives. This is an exceptionally poor plan. The government must not put politics above people.”

Road safety charity Brake also slammed the plans. Gary Rae, campaigns director, said: “These proposals had to be dragged out of the Government, who fought against it in the courts, and lost. It appears the Government has abdicated responsibility for reducing air pollution to local authorities. If any issue needs tackling on a national – and international – level, it’s this one. We have a national health emergency, and the Government is kicking the issue into the long grass.”