Going mainstream: The outlook for EVs

Long-awaited Company Car Tax reform could be about to create favourable conditions for accelerated electric vehicle demand in the UK, but there are still hurdles ahead. By Alex Grant. 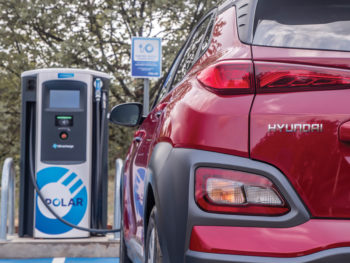 After a five-year hiatus, HM Treasury recommended the introduction of the 0% Company Car Tax band for EVs on 6 April 2020. The changes – which need to be ratified in a future Finance Bill – are part of a wider 2%-point reduction to accommodate WLTP CO2 figures but, uniquely, it will also apply to EVs registered before that date. Plug-in hybrids will move onto a scaled system, based on their CO2 emissions and electric range.

It’s a long-awaited drop from this year’s 16% band for sub-50g/km vehicles, which has left some EVs with little or no incentive versus the most efficient petrol models. However, it also follows a reduction in the Plug-in Car Grant for electric and hydrogen fuel cell vehicles, and its withdrawal for plug-in hybrids, last October. Given that the Treasury’s recent track record includes short-notice RDE2-based diesel taxation and WLTP-based Company Car Tax reforms, assurances of long-term support are desirable for fleets.

ACFO chairman, Caroline Sandall says: “Such decisions [as reducing the grant] undermine fleet confidence in the long-term availability of any other incentives, such as the workplace charging grant and 100% first-year allowances, to kick-start an embryonic market. There needs to be certainty from the perspective of businesses and fleets that incentives will be in place for the long-term and not ‘here today, gone tomorrow’.”

Electric vehicles have changed beyond recognition during the last decade, evolving from plastic-bodied city run-arounds to sophisticated and desirable long-range cars with wide-ranging viability for fleets. The challenge isn’t getting operators and drivers to take notice, it’s getting enough cars to satisfy that demand.

“It is evident that a combination of demand and favourable infrastructure and tax regimes in some markets has led to supply in those countries being prioritised and smaller numbers of vehicles being available for the UK market,” he explains.

LeasePlan UK, meanwhile, has seen a sizeable upswing in electric vehicles during the last six months. Matthew Walters, the company’s head of consultancy and customer data services, says demand now outstrips supply four to one, risking a situation where fleets are steered towards vehicles that they can’t actually acquire.

“We must have commitments from manufacturers on guaranteed volumes for the UK market, particularly as there’s now the added uncertainty around how those manufacturers will balance their EU emission targets against their UK supply post-Brexit,” he says. “Going forward, the Government must incentivise manufacturers to supply the UK with enough vehicles to meet demand if we’re to meet the recent 2050 (Net) zero emission target set out by Theresa May.”

Go Ultra Low claims around 80% of charging takes place at home or work, but widespread public infrastructure is a desirable back-up for drivers. The UK has one of Europe’s most advanced charging networks; 25,000 connectors at the end of July 2019, with 720 added during the previous 30 days and 8,500 since the end of August 2018.

ICFM director, Peter Eldridge says this isn’t always appreciated: “The perception of many fleet decision-makers is that there are too few public charging points – however, there are now more recharging points than there are [fuel] forecourts. But, as the recent ICFM Annual Members’ Conference heard from Josey Wardle, infrastructure manager at [low-carbon consultancy] Zero Carbon Futures, the issue is actually not about the number of recharging points, but about convenience, accessibility and availability at a good price.”

Access is improving. Most AC charging points feature a ‘Type 2’ socket compatible with a cable that’s usually included with the car, and faster DC charging points will often feature tethered cables for two, if not three, of the most common connectors. In July, the Government mandated membership-free pay-as-you-go credit and debit card access for newly installed points from next spring. Although there’s no requirement to retrofit older units, BP Chargemaster’s Polar network of 7,000 units will all offer ad-hoc access within 12 months, while InstaVolt chargers already offer contactless card payments.

Sandall says infrastructure issues have been an Achilles’ Heel for EV uptake, hampered by complex payments, difficult access and disrepair. “The current charging infrastructure does not give company car drivers confidence that they can reach their destination without considerable advance journey planning with time built-in to allow for recharging, which could be quite time-consuming,” she comments.

“As well as drivers having clarity as to where they can plug in, they also need to know that charging points are accessible. We have heard anecdotal stories of ‘charge point hogging’, particularly as recharging points tend to be at convenient locations close to car park entrances and exits, for example. Many towns and cities have introduced roadside signs clearly displaying car park locations and, frequently, the number of available spaces. Could something similar not be introduced displaying the location and availability of recharging points?”

Workplace charging not only caters for pool vehicles, but it also enables visitors to plug in and company car drivers to effectively double their range by topping up between commutes. Plugging in at work ceased to be a taxable benefit in April 2018, and the Workplace Charging Scheme now offers £500 per socket for businesses to install points.

This will likely get easier, with an open consultation already investigating one charging point per 10 parking spaces and pre-installed cabling for one in five spaces for all non-residential new-builds and heavy refurbishments. The Welsh Government dropped the requirement for planning permission for free-standing charging points at the start of April, which also cuts costs.

However, a recent Connected Places Catapult and Digital Catapult report says implementing workplace charging can still be prohibitively expensive. Adjusted to reflect last year’s increase in grant funding, this suggests a 7kW charging point with two outlets will cost £1,100, rising to £2,100-£4,500 for a double 22kW unit. The report expects a growing role for leased points to avoid up-front costs, or for businesses to treat them as a revenue stream outside work hours.

James McKemey, head of insight at Pod Point, says: “Our workplace sales are a fast-growing part of our business. We believe this is due to a general increased awareness of the imminent arrival of electric vehicle mass adoption and the importance of workplace charging to enable it, but certainly Government incentives including OLEV’s Workplace Charging Scheme have helped.

“As well as reducing capital outlay, the grant has encouraged businesses to find out what is on offer and therefore enquire about providing charging for fleets.”

Even the upper limit of the Government’s Road to Zero Strategy assumes 30% of new cars and 60% of vans won’t be ‘ultra-low emission’ by 2030. In the interim, electricity (and hydrogen) need to become seamlessly integrated into fleets’ fuel mix, and operators have different requirements to the ad-hoc access desired by private motorists.

Some of this is underpinned by recent fuel company acquisitions. Shell, which owns charging company NewMotion, has EV charging and hydrogen pumps on selected fuel forecourts in the UK and the Continent – both can be paid for with the Shell Card. BP Chargemaster is also expanding its offer for fleets, according to the company’s director of communication and strategy, Tom Callow.

“Fleet managers tell us that they want charging to be as simple as possible, and do not want to have to deal with thousands of receipts from pay-as-you-go transactions, and they want the confidence of being able to give their drivers access to charging points all over the country,” he explains.

“We have offered a fleet solution [Polar Corporate] for several years, where fleet managers can pay for all public charging on our network across their entire fleet with one monthly invoice, and are about to launch an integrated Fuel & Charge solution with BP.”

Allstar Business Solutions is now also offering access to charging networks. Paul Holland, managing director of UK fuels at parent firm Fleetcor, said: “Allstar’s fuel network is the largest in the UK, with 90% coverage, and we are expanding this proposition to ensure we are able to support fleets as they look at introducing alternative fuels into their fleet.

“As well as providing access to a large multi-branded EV charging network across the UK, the card will offer combined reporting and consolidated invoicing, helping businesses to keep on top of their fleet and company spending.”

Previous: How can the hybrid be saved?
Next: Fleet World Fleet: Mitsubishi Outlander PHEV 4hS