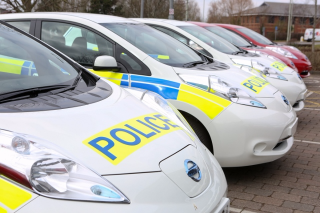 The force has implemented seven Nissan LEAFs, which will be charged at points installed at its own stations  – three will be marked cars for urban use while the other four will be unmarked for other operations.

Gloucestershire constabulary said it is looking at deploying more plug-ins on the force’s 412-strong fleet, around 90% of which run on diesel.

Police and crime commissioner, Martin Surl said: “Since the Volkswagen emissions scandal, we know that diesels are not as good for the environment as we thought, and I believe the police can and should make an important contribution to reducing emissions by using cleaner vehicles.”

Gloucestershire is the only force in the UK to achieve IS0 14001 accreditaiton, and it is beginning a thorough audit of its environmental footprint due for completion before the end of the year.

Surl said exhaust emissions will be of rising importance for future fleet acquisitions, regardless of cost.

“If it is shown beyond all reasonable doubt that the use of diesel as the primary fuel is damaging to the health of Gloucestershire I will actively seek alternatives even if the financial cost is higher,” he commented. “And I will not allow the constabulary to purchase or lease any vehicle where the manufacturer has been shown to deceive the public over emissions.”