Gigafactory at Coventry Airport could be operational by 2025

An electric vehicle battery plant could open at Coventry Airport by 2025 under new plans. 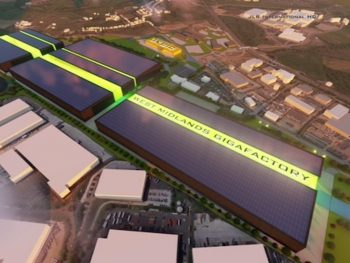 Coventry City Council is entering a partnership with the airport to develop proposals for a gigafactory, creating thousands of green jobs, attracting up to £2bn of investment and supporting the drive for net zero.

While gigafactories have already been developed in other parts of the world – for example, by Tesla in the USA – there isn’t currently one in the UK.

The Government is actively pursuing investment in a gigafactory and has made up to £500m funding available; both announcements were made by Prime Minister Boris Johnston in the October 2020 confirmation of the 2030 petrol and diesel new car ban.

The West Midlands Combined Authority, which is led by the West Midlands Mayor and comprises the region’s seven urban councils, has said it will bid for the funding and formally endorsed Coventry Airport as the preferred site for such a plant.

As part of its bid, the West Midlands will promote the fact that it’s already home to several automotive manufacturers, including Jaguar Land Rover, Aston Martin Lagonda, BMW, LEVC and others.

The news is particularly pertinent as Jaguar Land Rover announced plans yesterday (15th February 2021) for Jaguar to become an all-electric brand from 2025 while all Land Rover models will be offered in pure electric form by the end of the decade.

And former JLR CEO Ralf Speth last year called on government and industry to work together to bring gigascale battery production to the country, building on the UK Battery Industrialisation Centre and the Government’s Faraday Battery Challenge and making the UK less dependent on imported batteries.

Andy Street, the Mayor of the West Midlands, said: “The point I have been ferociously lobbying to government is that the West Midlands is the natural place for a UK gigafactory as we are already home to the country’s biggest car manufacturer, Europe’s largest research centre, the UK’s only battery industrialisation centre, and a world-leading supply chain.

“By announcing the site now and driving forward with a planning application and a joint venture, we are showing how united and serious the region is about making this happen.”

As part of its bid for funding, the West Midlands said it’s in discussions with the UK’s leading car makers and battery suppliers across the globe “to put together the strongest bid possible”.

Further details on the plans are available on the gigafactory website.