French ride-hailing service Kapten has launched in London to bring a ‘best value’ rival to Uber. 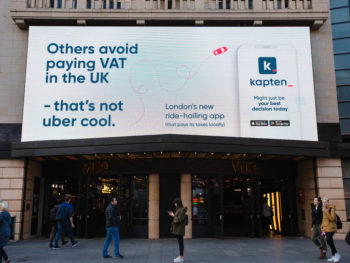 Backed by Daimler and BMW, the firm – formerly known as Chauffeur-Privé – first launched in France in 2012 and operates in Paris. Its expansion into London with an official TfL licence follows successful launches in Lisbon and Geneva.

Operating across zones 1-5 in vehicles including plug-in hybrids and electric cars, the app-based service arrives in London with a 50% off offer on rides but the firm says ongoing low pricing will mean fares are on average 20% cheaper than the competition.

Kapten also offers a fixed-price guarantee on rides and a loyalty programme that enables users to earn free rides, rewards from partners and enhanced referral bonuses.

As well as promoting its pricing offers, the firm’s launch in London also takes a swipe at Uber for avoiding local taxes. A campaign has gone live with the wording Others avoid paying VAT in the UK, that’s not uber cool’ at several media sites across the capital, including Leicester Square.

The company is also highlighting its driver policies. The driver training sees all Kapten’s driver partners complete TfL’s licensing process. The firm also offers driver benefits including the company covering the Congestion Charge for the rest of 2019 and additional rewards for plug-in hybrids and electric cars.

Mariusz Zabrocki, London general manager of Kapten, said: “There has been one dominant, over-confident ride-hailing player in London and it’s time to shake things up. We believe London’s private-hire drivers, commuters and residents deserve better. Each time a Londoner takes an Uber ride, 60p is lost that could finance the NHS, schools and other parts of the UK economy.”