The former Daimler ‘mytaxi’ app has launched a taxi hunt as it marks its rebrand to ‘Free Now’. 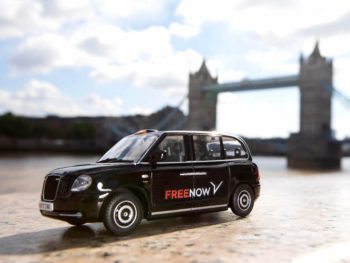 The Taxi Hunt follows the rebrand to Free Now

The rebrand forms part of the BMW and Daimler mobility joint venture, which was announced in spring 2018 and combines the carmakers’ mobility offerings to bring a single source for everything from ride-hailing to EV charging. The deal has already seen them team up on car sharing, with Daimler and BMW’s respective Car2go and DriveNow now joining forces under the Share Now banner to become the largest free-floating car sharing provider worldwide, according to the firms.

And now mytaxi has rebranded to Free Now, including an updated app as well as new on-car advertisement, digital and physical advertising.

In line with the rebrand, Free Now has launched a city-wide game to help Londoners re-discover the capital. A total of 100 miniature black taxis have been hidden in London with each one unlocking a unique experience for the finder – as well as a complimentary cab to get them there. Prizes on offer include a cream tea in Knightsbridge or a philosophy lesson in Bloomsbury. Other prizes include meals with street food traders Kerb, independent cinema tickets and DIGME Fitness classes. The star prize for one winner will be a weekend stay in one of 100-plus European cities where Free Now is active, including Lisbon, Barcelona and Rome.

Commenting on the Taxi Hunt, David Savage, UK general manager, said: “We live in an incredible city, but with the daily pressures of work, caring for loved ones and maintaining a household, we forget to stop, get out and enjoy what’s around us. That’s why, to celebrate the launch of Free Now, we’ve launched Taxi Hunt, a competition that encourages Londoners to take a closer look at their surroundings and rewards their curiosity with a range of treats and experiences that will encourage them to get out and discover unfamiliar parts of this great city.”