A new EV charging hub said to be the UK’s largest is to be deployed at Brent Cross shopping centre. 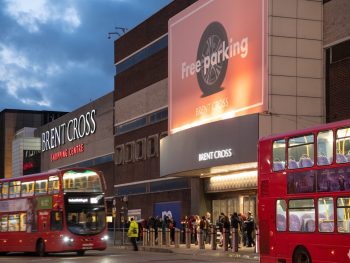 The hub will be installed by Franklin Energy over the next five years, creating up to 236 EV bays at the shopping centre car park

The hub will be installed by Franklin Energy over the next five years, creating up to 236 EV bays.

The chargers, which will be operated and maintained by Franklin Energy on the LiFe Network and supported by renewable electricity contracts, will be supplied by EVBox and installed over a number of phases.

In the first phase, a total of 50 22kW fast charging points will go live in the multi storey car park along with two 350kW ultra-rapid charging points in the Western overflow car park; these will be ready by the end of 2021.

The charge points are expected to not only be used by customers – which on average spend 95 minutes at the shopping centre – but also by drivers passing by on the nearby M1, A41 and A406 via the North Circular. Some 80 million cars pass through the Brent Cross interchange every year.

The plans have been unveiled by Hammerson and Aberdeen Standard Investments, joint owners of the Brent Cross shopping centre, as part of their ongoing work on sustainability.

Louise Ellison, group head of sustainability at Hammerson, commented: “The installation of the UK’s largest EV charging facility will not only attract more visitors to our centres at a time when we are expecting to see a significant increase in electric vehicles on the roads, but also shows our continued commitment to tackling climate change, as we continue our journey towards becoming net positive by 2030.”