Fleets are being urged to develop vulnerable road user policies as new research finds out that only a fifth (20%) of organisations have specific policies in place. 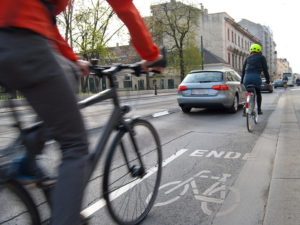 Carried out by Brake and supported by Licence Bureau, the Fleet Survey Report 2018 follows an online survey sponsored by Licence Bureau and completed by 107 fleet representatives, who manage more than 1.05 million vehicles in total and have more than 413,000 employees who regularly drive for work.

The report reveals that more than a third (38%) of respondents believe that the fleet industry as a whole is not doing enough to look after cyclists and motorists.

It also shows just 52% of organisations have driver handbooks that include guidance on protecting vulnerable road users including cyclists, motorcyclists and pedestrians.

However, the fifth (20%) of organisations that do have specific policies on vulnerable road users seem to be giving good advice. More than nine in 10 (94%) highlight the importance of rigorously checking vehicle blind spots, and more than three-quarters (78%) state that drivers should leave at least 1.5m between their vehicles and riders when overtaking. Most respondents (94%) said they ask their drivers to be particularly vigilant when near schools, communities and built up areas.

Malcolm Maycock, managing director of Licence Bureau, said: “Although the findings suggest some 84% of fleet managers recognise the importance of road safety, and three quarters of respondents believe their organisation has the right policies in place to protect vulnerable road users, clearly more could and should be done to develop this area.

“Clearly, there is an awareness around the issues related to vulnerable road users, but fleets need to ensure they document policies on the subject and make them a core component of their driver handbooks and education pathways.”