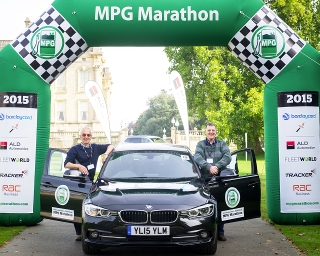 Driving a BMW 320d ED Sport Saloon, with co-driver and navigator Richard Holt, Powell clocked up an overall mpg of 72.65, some 10.57% better than the official manufacturer stated figures for the vehicle of 65.70mpg on the combined cycle.

Afterwards, Powell said he’d relied on the eco-driving skills that he had learned from entering 14 of the previous 15 MPG Marathons.

“Eco-driving is all about planning and anticipating ahead, with as light a touch on the throttle as possible. You need to try and keep the car rolling at all times, especially when approaching traffic lights when you need to ease off well in advance, so that ideally you arrive just as the light turns to green.

“Under the new rules which allow you to navigate between two fixed points, Richard and I had worked out our route beforehand to avoid the centre of all towns and any potential traffic jams.

“We also drove on a number of motorways at around 60mph when it was important to keep an eye open for HGV traffic which was travelling slightly faster than us. Overall, it was a great Marathon with excellent weather and a keenly fought contest,” he said.

Powell and Holt were in one of five BMW diesels taking part in the contest to find the most efficient fleet driver within the main MPG Marathon event. And in second place was the pairing of Kevin Booker and Les Stiff, who achieved an overall mpg of 72.44mpg, a 10.26% improvement over the official consumption figures.

Overall, the drivers of the five BMWs taking part achieved an average improvement in fuel consumption of 6.71% over the manufacturer’s official figures for the combined cycle.

Matt Bristow, general manager, corporate sales at BMW, said: “Congratulations to the winners, Doug Powell and Richard Holt, in the most efficient fleet driver category. We are delighted with the performance of the BMW vehicles used in the company car class of this year’s MPG challenge.

“The 320d ED Sport has proved itself as a highly efficient company car, along with demonstrating excellent levels of standard equipment and superb kerb appeal,” he said.

Event organiser and Fleet World publishing director, Jerry Ramsdale, said: “I’d like to add my own congratulations to Doug and Richard for their performance in our new category this year.

“Their performance, and those of the other drivers in the BMWs, showed that it’s easily possible to achieve fuel consumption figures significantly in excess of the manufacturers’ own figures by applying the correct eco-driving skills.

“This year’s MPG Marathon again clearly demonstrated how both vehicle and driver can make a massive difference to fuel costs and emissions and just how effectively that cost can be managed by achieving exceptional fuel consumption,” he said.

The overall winner of this year’s event, the 15th to date, was former professional motorsport manager and rally driver Mick Linford, now an automotive events specialist, who clocked up an astonishing 104.50 mpg overall in a Peugeot 208 Active Blue HDi.

Driver alongside part-time rally co-driver Jemma Champion, Linford, who had previously won the event three times before, from 2009 to 2011, said he was “over the moon” with the performance which was the highest mpg he had recorded so far.

This year also saw the event’s two youngest-ever entrants, Eloise Peabody-Rolf and Rory Carmichael, both just 17. Driving a Honda Civic 1.6 i-DTEC SE, they recorded a highly creditable overall mpg of 93.81 at their first attempt – and only weeks after passing their driving tests.

For sponsors Barclaycard, Account Development Director, John Bostock, said: “We’re passionate about helping consumers and fleet managers understand how they can save money on their fuel bills, so sponsoring this year’s MPG Marathon celebrating eco-friendly driving was the perfect partnership for us.

“We know that the potential environmental and financial impact of efficient driving is huge, with recent Barclaycard research showing that motorists in the UK waste around £700 million a year simply through eco-unfriendly driving habits. Nobody wants to be spending more than they need to on fuel, so we can certainly all learn from the impressive efforts of this year’s competitors when it comes to finding ways to drive as economically as possible.”

Paul Jackson, managing director of The Miles Consultancy, who took part this year in an Audi TT Sport Ultra, added: “It’s genuinely amazing the difference that eco-driving techniques can make. There is huge potential for fleets to save costs on fuel by putting in place the right tools and incentives for driving up fuel economy."

This year’s MPG Marathon comprised a combined total of approximately 380 miles across the Oxfordshire/Wiltshire/Hampshire countryside. Contestants were free to plan their own routes, provided they included a number of pre-agreed, fixed points, which made keen navigational skills essential.

For more details of the MPG Marathon,please visit the event website at http://www.thempgmarathon.co.uk/