Former champion chalks up another win in the 2015 MPG Marathon 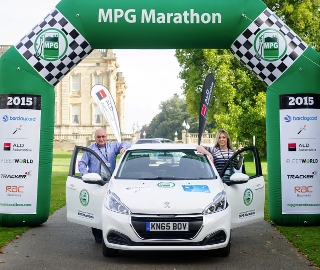 Linford, who won the event three times from 2009 to 2011 said he was “over the moon” with the performance.

“I had no idea we had done so well. This is the highest mpg I have ever achieved in the event and I’m absolutely delighted to win it again,” he said.

They in turn were only just ahead of third placed drivers, John Kendall, editor of International Fleet World, and Paul Nieuwenhuis of Cardiff Business School, who recorded 103.28mpg in a Citroen C4 Cactus Feel Blue HDi 100.

Alongside the competition for the best outright MPG, the Marathon also challenged drivers to improve on the manufacturers’ official fuel consumption figures for their vehicle.

Claiming first place in this category were Paul Clifton, the BBC’s transport correspondent for southern England, and former police inspector, Shaun Cronin. Behind the wheel of a Honda CR-V 1.6 i-DTEC SE (2WD), they recorded 84.34mpg, a 31.37% improvement over the manufacturer’s stated figures.

In second place in this category were the overall winners Linford and Champion, whose outstanding performance was 29.49% better than the manufacturers’ official fuel consumption figures for their vehicle.

And in third place in this section was last year’s overall winner, Honda engineer Fergal McGrath who, with co-driver Rick Rowles in a Honda Civic Tourer 1.6 i-DTEC, achieved a highly impressive 90.46mpg, 24.94% better than the manufacturers’ figures.

Special mention must be made of the event’s two youngest-ever entrants, Eloise Peabody-Rolf and Rory Carmichael, both just 17. Driving a Honda Civic 1.6 i-DTEC SE, they recorded a highly creditable overall mpg of 93.81 at their first attempt – and only weeks after passing their driving tests.

Event organiser and Fleet World publishing director, Jerry Ramsdale, said: “Congratulations to all the contestants in this year’s MPG Marathon. This was probably our best MPG Marathon to date in terms of mileages achieved by what were, in all cases, standard production cars.

“Special congratulations to our overall champion, Mick Linford. To win the event four times is unprecedented and a huge credit to his lean driving skills.

“Above all else, this year’s event showed conclusively that the current generation of modern cars and vans is more fuel-efficient and more environmentally friendly than ever before. It is an outstanding testimony to the achievements of all the participating motor manufacturers,” he said.

For sponsors Barclaycard, Account Development Director, John Bostock, said:  “We’re passionate about helping consumers and fleet managers understand how they can save money on their fuel bills, so sponsoring this year’s MPG Marathon celebrating eco-friendly driving was the perfect partnership for us.

“We know that the potential environmental and financial impact of efficient driving is huge, with recent Barclaycard research showing that motorists in the UK waste around £700 million a year simply through eco-unfriendly driving habits. Nobody wants to be spending more than they need to on fuel, so we can certainly all learn from the impressive efforts of this year’s competitors when it comes to finding ways to drive as economically as possible.

“Congratulations to Mick Linford and Jemma Champion, who through their highly impressive eco-driving techniques have rightfully been crowned this year’s winners,” he said.

Paul Jackson, managing director of The Miles Consultancy, who took part this year in an Audi TT Sport Ultra, added: “Taking part in the MPG Marathon has been a fascinating experience. TMC is all about real-world fuel costs so it's been very interesting to participate in an event that really explores the level of economy that drivers can achieve when they put their minds to it.

“It’s genuinely amazing the difference that eco-driving techniques can make. There is huge potential for fleets to save costs on fuel by putting in place the right tools and incentives for driving up fuel economy."

This year’s MPG Marathon comprised a combined total of approximately 380 miles across the Oxfordshire/Wiltshire/Hampshire countryside. Contestants were free to plan their own routes, provided they included a number of pre-agreed, fixed points, which made keen navigational skills essential.

For more details of the MPG Marathonplease visit the event website at http://www.thempgmarathon.co.uk/