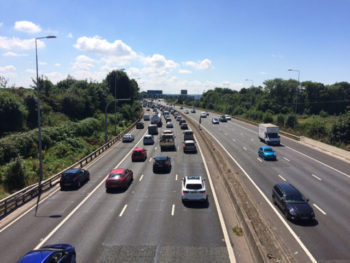 Analysis by Green Flag of the 750,000 traffic incidents that occurred on UK roads on the three-year period in 2015-17 found that some 9,000 of these incidents involved a vehicle colliding with a stationary vehicle.

And of this figure, two-fifths (42% or around 3,780 incidents) occurred on a motorway or a main road hard shoulder. This means that every week, around 24 vehicles hit a parked car in a hard shoulder on a major road, which is an average of 3.5 every day. And almost a fifth (19%) of these incidents resulted in serious injury or death.

The research indicates the most dangerous drivers are in the capital – two fifths (41%) of road traffic collisions with a stationary vehicle occurred in London.

The analysis has been published as Green Flag warns of the higher risk of traffic incidents over the coming August bank holiday. With August Bank Holiday traffic set to wreak havoc on UK roads causing delays across the nation, research has shown that a high number of traffic incidents will occur.

Green Flag’s Damon Jowett commented: “It’s important for people to be aware of the danger of driving on motorways, which are a hotspot for traffic incidents and resulting fatalities. Many accidents can be prevented. If there is a vehicle stopped on the hard shoulder, drivers need to slow down and move their vehicle over to the next lane when safe to do so. This simple manoeuvre not only helps protect the drivers and passengers in the stationary vehicle, but it also safeguards our roadside workers as they assist them.”