Ford and Waze have teamed up to offer the traffic and navigation app to all Ford vehicles equipped with SYNC 3. 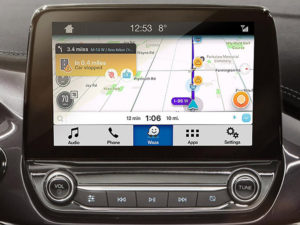 The system requires a compatible smartphone running the Waze app to be plugged into the USB socket in order to display on the large in-built screen.

Any 2018 model year Ford vehicle equipped with SYNC 3 version 3.0 or greater will be able to run Waze on its touch screen. Other SYNC 3-enabled Ford vehicles can receive an over-the-air update or an update via USB to enable Waze functionality.

Don Butler, Ford executive director, Connected Vehicle and Services, said: “With the flexibility of our SYNC 3 software and AppLink, customers can easily use Waze to get all the traffic and navigation help they need – on a big screen and without having to fiddle around with their phones while driving.”

The two companies announced their partnership at the Mobile World Congress in 2017. Ford is also working to bring users further apps via SYNC AppLink, including internet radio app iHeartRadio and Ford+Alexa, which gives customers access to Amazon’s voice assistant in-car.