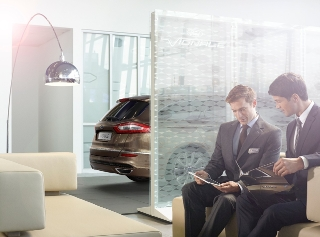 It added that it would launch five new vehicles to compete in the SUV and crossover space in the next three years, starting with new Edge in the second quarter. SUVs remain Europe’s fastest-growing market segment, and Ford expects to surpass 200,000 SUV sales in Europe for the first time in 2016 – a growth of more than 30% compared with 2015

Ford also said it would expand its premium Vignale line and customer experience from one model today – Mondeo Vignale – to at least five Vignale models by 2017.

It also confirmed that it will introduce new plug-in hybrid, hybrid-electric and full electric vehicles in Europe by 2020 – part of its $4.5bn investment in electrified vehicle solutions.

Other model plans include the launch this year of eight vehicle lines in Europe with all-wheel drive or four-wheel drive technologies, compared to three models in 2012. And it will also continue to invest in and strengthen its line-up of commercial vehicles, including new powertrain and technologies for Transit Custom and Transit 2-tonne, and a freshened Ranger for 2015

The carmaker said its plans follow the closure of three manufacturing plants in Western Europe and its return to profit in 2015, and see will the launch of seven new or freshened vehicles in 2016 including Focus RS and new Kuga and Edge SUVs.

In addition, a drive to cut costs by $200m annually will also see jobs slashed while Ford of Europe said it would continue to drive improvements in its manufacturing operations, targeting efficiencies of greater than 7% year-over-year going forward.

“We are creating a far more lean and efficient business that can deliver healthy returns and earn future investment,” said Jim Farley, Ford executive vice president, Europe, Middle East and Africa. “Our job is to make our vehicles as efficiently as possible, spending every dollar in a way that serves customers’ needs and desires, and creating a truly sustainable, customer-focused business.”