Ford is to begin European testing of autonomous cars in 2017, expanding on its existing research in the US. 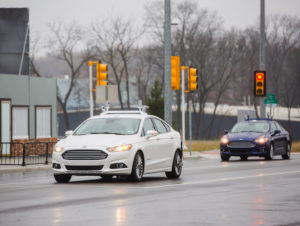 Ford has been testing its fully autonomous Fusion Hybrid Research Vehicles at the Mcity facility at the University of Michigan.

The carmaker has already been testing autonomous vehicles for over 10 years, including at the Mcity full-scale simulated real-world urban environment at the University of Michigan, and earlier this year it established its Ford Smart Mobility (FSM) subsidiary to develop in-car connectivity, ride-sharing and autonomous technologies.

This year also saw Ford triple its autonomous vehicle test fleet to about 30 self-driving Fusion Hybrid sedans on the roads in California, Arizona and Michigan – said to be the largest test fleet of any automaker – with plans to triple it again next year.

Thomas Lukaszewicz, manager, automated driving, Ford of Europe, said: “We have already announced plans to use an autonomous vehicle for a ride-sharing service in the US in 2021 and it is important that we extend our testing to Europe. Rules of the road vary from country to country here, traffic signs and road layouts are different, and drivers are likely to share congested roads with cyclists.”