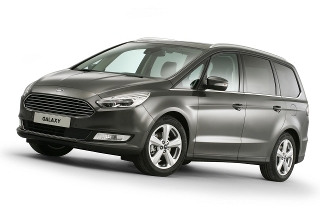 Innovations include a control panel in the rear luggage compartment enables all five second- and third-row seats to be folded flat at the push of a button. There’s also a new feature, claimed to be a segment first, that raises third-row seats at the push of a button. Other practical features include a flat load floor with up to 20 litres of hidden storage underneath thanks to the new Cargo Management System plus the Hands-Free Liftgate.

Passengers also benefit from increased space, with up to 10mm more headroom for second and third row occupants and the third-row seat is sadi to more space than key competitors, with up to 40mm more headroom. Elbow and shoulder-room are optimised by retaining the traditional swing-open rear door design.

The all-new Galaxy also is among the first vehicles to benefit from Ford Adaptive Steering technology that will make the seven-seater easier to manoeuvre in town, and deliver greater steering precision at higher speeds.

Advanced driver assistance systems feature on the new Galaxy offer the ability to monitor speed restrictions, pedestrians and other vehicles to help them focus on the task of driving. Further systems include Ford’s Adaptive Front Lighting System that adjusts the headlight beam angle to match the driving environment, and can prevent dazzling other drivers with the Glare-Free Highbeam function.

Meanwhile there’s a range of parking technologies, such as Perpendicular Parking, which can detect and reverse the car hands-free into spaces alongside other cars in the same way that Active Park Assist helps drivers to parallel park

Park-Out Assist helps drivers exit a parallel parking space, the system operating the steering while the driver operates the accelerator and brake while Side Parking Aid delivers audible alerts and on-screen distance indicators to obstacles around the vehicle. And Cross Traffic Alert warns drivers reversing out of a parking space of vehicles that may soon be crossing behind them

Front Split View Camera enhances the driver’s field of vision when pulling out of a parking space or junction with a 180 degree camera system installed at the front of the Galaxy, and displays the image on the 8-inch high-resolution touchscreen in the centre console

Previous: 86% of fleets have experienced road accident in past 12 months
Next: Mark Wheeler appointed as new fleet sales director at Nissan