Ford Mustang to show parsimonious side in 2016 MPG Marathon

A 5.0-litre V8 muscle car might not be the obvious choice of vehicle to enter into an eco-driving contest, but that’s exactly what the UK’s best-selling car brand will be doing in this year’s MPG Marathon. 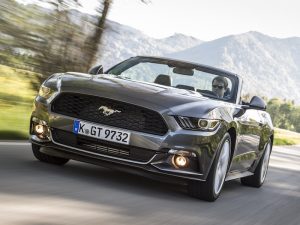 One of Ford’s entries in the annual fuel economy challenge is a convertible version of the iconic Mustang, which develops 410bhp and has a top speed of 155mph. With an average fuel consumption figure of 20mpg, it’s hardly the obvious choice for an event that celebrates economical driving. Or is it?

“The great thing about the MPG Marathon is that it’s as much about driving style as it is about eco vehicles,” said event organiser, Jerry Ramsdale. “By entering a car like the Mustang and showing the world how much the crew can improve the fuel economy over the standard MPG figure, Ford is demonstrating how even the most performance-oriented of cars can be fuel efficient if driven in a responsible, eco-friendly manner.”

The crew behind the wheel of the Mustang are better known for their high performance driving antics, with former Ford works rally crew Andy Dawson and Andy Marriott at the controls. But the pair are no strangers to the MPG Marathon, having won the event outright in 2012 at the wheel of a Ford Fiesta ECOnetic 1.6 TDCi.

Kevin Griffin, Ford of Britain sales director, said: “Since right-hand drive Mustang arrived here for the beginning of the year, over 3,000 have been delivered to proud new owners – two thirds of them with 5.0-litre V8 engines.  They powered Mustang to the top of the sales charts as the UK’s top selling high performance sales car. But a high power rating need not necessarily mean excessive fuel consumption – as this year’s MPG Marathon is set to demonstrate.”

The Mustang is in stark contrast to the University of Birmingham’s hydrogen fuel-cell powered Hyundai iX35, announced as an entrant in this year’s MPG Marathon last week, and illustrates the incredible diversity and inclusiveness of the UK’s premier event to promote fuel efficient and environmentally conscious driving.

Sponsored by ALD Automotive, RAC Business and Crystal Ball, a provider of fleet management systems, the MPG Marathon takes place on October 18-19, based out of the Heythrop Park Resort in Oxfordshire. Competitors will be tasked with planning their own routes to four different venues across the heart of the country, including a visit to the iconic Silverstone racing circuit in Northamptonshire, home to the British Grand Prix.

Although the 2016 event is already heavily subscribed, there are a limited number of places still available for vehicle manufacturers, fleet operators, dealer groups or even individuals to take part.

To find out more about the event, or to enter, go to ww.thempgmarathon.co.uk