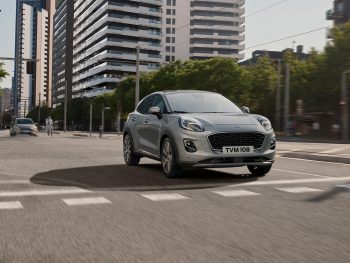 It will launch on the Puma and Fiesta 1.0-litre EcoBoost Hybrid models, which feature Ford’s 48V mild hybrid technology. The system uses a belt-driven integrated starter/generator (BISG) to recover energy usually lost during braking and coasting and charge a 48V lithium-ion battery pack. The BISG also acts as a motor, integrating with the engine to provide torque assistance that can enhance fuel efficiency or performance, depending on the driving scenario.

Initial data, yet to be homologated, indicates that the Fiesta 125hp 1.0-litre EcoBoost Hybrid with the auto box will have CO2 emissions from 118-128g/km and fuel efficiency from 50.4-54.3mpg with standard tyres.

The addition of the seven-speed automatic transmission also supports additional driver assistance features including stop & go functionality for adaptive cruise control. This can bring the vehicle to a complete halt in stop-start traffic and automatically pull away if the stopping duration is less than three seconds. The new auto also enables remote start functionality, via the FordPass app.

Roelant de Waard, general manager, passenger vehicles, ford of Europe, said: “Adding the option of our seven-speed automatic transmission for EcoBoost Hybrid is another step in our mission to make electrification accessible to all our customers.”