As Ford’s all-new Focus breaks cover, Alex Grant looks back at how the original broke new ground for the Blue Oval 20 years ago. 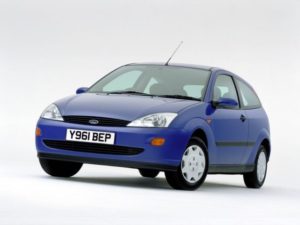 Modern design and class-leading handling put the original Focus ahead of the pack.

The atmosphere at Ford’s pre-launch event at the Geneva Motor Show back in 1998 must have been tense. In front of a large crowd of gathered media, the carmaker was preparing to replace the Escort – its biggest-selling model with 20 million European sales over its three-decade lifespan – with a revolutionary newcomer.

There was a lot to lose. Escort customers were loyal, and repeatedly bought into an evolving but familiar ownership experience, similar to that of the Volkswagen Golf. The Focus was anything but evolutionary, even down to its last-minute rejection of that well-known badge. This was as significant a change as the futuristic Sierra superseding the Cortina almost 16 years previously – something which had initially been a hard sell.

Looking back, now that the Focus has become such a part of the landscape on British roads, perhaps they ought not to have worried. Where the Escort had become decidedly ordinary, the Focus looked cutting edge in ways that made the competition look dated. It made Ford impossible to overlook, not to mention being better built and more fun to drive too.

Ford had taken a detailed approach to its newcomer. The cabin had been computer-optimised to fit all shapes and sizes of passenger and the wheelbase was the longest in its class to maximise space. Its stiff body structure was safe and incredibly light, and the Mondeo Estate-derived multi-link rear suspension meant it could provide excellent stability and ride comfort, yet still offer enough boot space for two suitcases to fit in side by side.

At launch, buyers could choose from five engines. The four petrol engines included 75bhp and 98bhp 1.4 and 1.6-litre units shared with the Fiesta, the latter being the big-seller, while the 113bhp and 128bhp 1.8 and 2.0-litre options were from the Mondeo. A single diesel, producing 90bhp and returning 57.6mpg, was also available, replaced with a newer TDCi engine during the 2001 facelift. Sporty ST and RS versions – both popular in the UK – arrived from 2002.

For fleets, the Focus offered best-in-class ownership costs by up to 15%, helped by up to 25% improved fuel efficiency, long service intervals, and components designed to minimise workshop time. It used far more recycled materials in its construction and was engineered to minimise waste at the end of its life.

Ford hit the ground running. The Focus beat the Vauxhall Astra to take the European Car of the Year title in 1999 and received 300,000 orders within six months of arriving in showrooms. By the time the last Escorts were registered, its replacement was a familiar sight and no longer challenging – the Focus became the world’s bestselling car in 2001, with 917,000 sold globally. By the time the second-generation car arrived in 2006, 779,087 had sold to UK customers.

Of course, it’s long since surpassed the Escort. The Focus broadened its sales footprint over three generations and the car sold in Europe is now available worldwide – something this year’s all-new model will continue. That once-guarded name change remains one of the world’s biggest-selling nameplates, with repeat customers as loyal as its predecessor – a worthwhile reward for some sleepless pre-Geneva nights 20 years ago.FIND OUT MORE: To discover how the new Focus could fit your fleet’s needs, visit Ford’s stand at the Fleet Show 2018. Click here to register.