Ford is bringing forward part of the summer shutdown period for its UK operations to the Easter period to stave off the impact of the coronavirus pandemic. 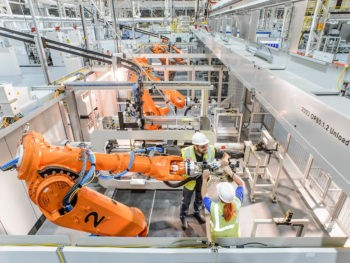 Citing the dramatic impact the ongoing crisis is having on the European market and the supplier industry, the carmaker said production at its Dagenham Engine Plant in East London would temporarily cease from Monday 23 March.

The Bridgend Engine Plant in South Wales will temporarily cease production from the end of the day on Wednesday 25 March.

In addition, the shutdown period will also be extended across the rest of the Ford business in the UK, excluding a small number of employees supporting ‘business-critical’ activities.

During the four-week period, all Ford of Britain employees will receive payments at least equivalent to their base pay.

Earlier this week, Ford said it was shutting its Spanish plant in Valencia for a week after three employees tested positive for Covid-19. The carmaker added that it was taking quick action to follow the established protocol, including the identification and self-isolation of all employees who had close contact with the affected workers. The plant assembles various models including the Kuga, Mondeo and Transit Connect.

Ford has also halted production at its North American plants until at least 30 March.