Newly published footage from Highways England shows a lorry driver narrowly avoiding a collision with another HGV while using his mobile phone at the wheel. 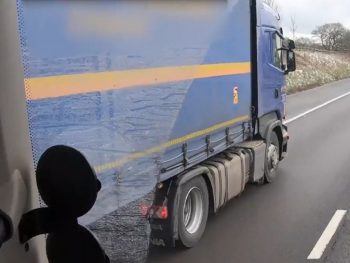 The incident, caught using an unmarked HGV cab ‘supercab’, shows how the lorry veers over to the hard shoulder before almost hitting the HGV cab alongside it.

It’s the latest footage to be captured by Highways England’s ‘supercabs’, which have been in use under its Operation Tramline initiative since 2015. Since then, more than 21,600 offences have been recorded.

The HGVs allow police officers to film evidence of unsafe driving behaviour by travelling alongside vehicles. Drivers are then pulled over by police cars following a short distance behind.

Since 2015, more than 21,600 offences have been recorded with the help of the HGVs. The most common offences include not wearing a seatbelt (6,253 offences), closely followed by using a mobile phone (6,073).

The cabs are now being deployed for a week of action on the M6 to reduce the number of incidents on the motorway.

The campaign runs from today (Monday 24 May) and will aim to reduce the number of incidents on the M6, the longest motorway in the country.

Highways England deals with around 180 reported incidents on the M6 every day, including traffic collisions. A total of 4,222 were reported on the M6 in 2019.

Head of road safety Jeremy Phillips said: “The Operation Tramline cabs are an important part of our commitment to tackling dangerous driving and those who take unnecessary risks with their own safety and that of others on the road.

“The number of people found using their mobile phone while driving is quite alarming. You are four times more likely to be in a crash if you use your phone and, if caught, face a £200 fine and six points on your licence.

“Through this week of action on the M6 we want to make all of our roads safer by raising awareness and encouraging motorists to consider their driving behaviour.”