Fleets given ‘stop the crash’ demonstrations at Silverstone Fleet Show 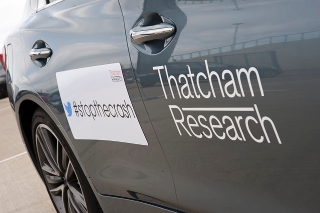 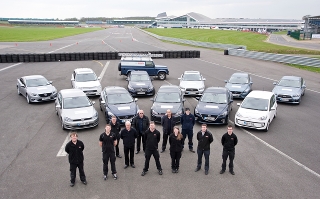 The ‘Stop the Crash’ driver experience is being demonstrated at this year’s event on Tuesday 12th May, by the insurance industry-backed Thatcham Research Centre, alongside Bosch and Driving For Better Business. It will focus on the very latest Autonomous Emergency Braking (AEB) systems, one of the most important primary safety technologies of recent years.

Fleet decision-makers will be able to experience at first hand the latest AEB technologies in three key test driving conditions: city, inter-urban and pedestrian, which takes place on a specially set-aside area of the Silverstone circuit that will have a regular shuttle bus service throughout the day.

In the city test, at speeds of under 20mph, fleet managers will be able to take the wheel in a controlled environment which shows how effective AEB can be in classic urban driving conditions.

In the inter-urban test, they will be able to experience from the passenger seat with a Thatcham-approved driver at the wheel how AEB can avoid or mitigate the effects of a collision at differential speeds of 50mph and beyond.

And in the pedestrian test, which becomes part of the Euro-NCAP crash and safety test from next year, they will see how AEB identifies vulnerable road-users, such as pedestrians and cyclists, using stereo camera technology and then takes steps to avoid them.

Other demonstrations available on the day will include ‘traffic queue assist’ – a type of semi-autonomous driving at low speeds intended to eradicate collisions in traffic queues – and both guided and full autonomous parking.

And in a unique test in an Infiniti Q50, fleet managers can see for themselves how effective reversing AEB can be in preventing potentially fatal accidents involving vehicles reversing over small or vulnerable objects.

Other available features will be a driving simulator to show how lane departure warning and lane assist technology works, while there will also be a review of some of the latest technology coming through, including ‘heads-up’ safety displays.

And there will be a demonstration of the latest ABS systems on motor bikes to show how the latest technology significantly reduces braking distances.

For fleet decision-makers who would like to discuss the new systems in more detail, there will be a specially arranged roundtable session over lunch in the Silverstone wing, featuring representatives from Thatcham, Bosch and Driving for Better Business.

A Thatcham spokesman said: “In this year’s ‘Stop the Crash’ driver experience, fleet managers will be able experience just how effective the latest AEB is in reducing accidents, cutting costs and saving vehicle downtime, as well as trying some of the latest models on which it is now available.”

Live demonstrations will feature a wide range of vehicles that are currently fitted with AEB as standard, including models from Ford, BMW, Mercedes-Benz, Volkswagen, Skoda, Volvo, Mazda, Porsche and Jaguar.

Jerry Ramsdale, Fleet Show event director, said: “Our intention with this year’s Show is to provide fleet managers with as many good and valid reasons to attend the event as possible.

“The AEB demonstration area is one such example, and we are sure that fleet managers will want to see for themselves just how effective the new systems are in reducing both the human and vehicle costs of accidents and cutting vehicle downtime.

“We are delighted with the wide range of new technology initiatives that will be at this year’s Show, and the event promises to provide fleet decision-makers with a number of compelling reasons to take a day out of their busy schedules,“ he said.

This year’s Show sold out its existing footprint before Christmas, prompting organisers to make additional space available in Hall 3 to cope with the extra demand, on a first-come, first-served basis.

Jerry Ramsdale added: “Anyone who wants to exhibit at Silverstone in May needs to get in touch as soon as possible as there is a limited amount of space still available. Demand has been overwhelming, following the outstanding success of last year’s event which saw record numbers of high-quality visitors.”