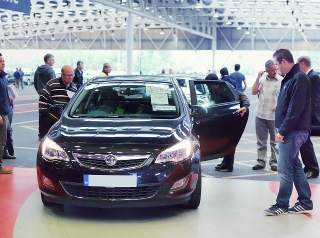 The headline average value of a used car in March fell to £7,524, down by £290 (3.7%) compared to February. Performance against CAP Clean fell marginally from 99.08% in February to 98.77% in March. Year-on-year, however, values were up by £137, a 1.8% rise with average mileage and age changing little over the year. Performance against CAP Clean was up slightly compared to 2014.

Simon Henstock, BCA’s UK operations director commented “Despite volumes continuing to rise in the wholesale sector, demand was steady across the range of stock on offer at BCA in March. Reflecting seasonal patterns, we saw greater volumes from dealer part-exchange sources and this shift in the model mix impacted the headline value."

He continued “As we said last month, retail demand typically softens post-Easter and with the General Election campaigns now in full swing we should expect a little uncertainty in the wholesale markets over the coming weeks.”

Fleet & lease cars averaged £9,670 in March, a fall of just £3 compared to the record value achieved in February. Average age and mileage were broadly static over the month, while retained value against original MRP (Manufacturers Retail Price) improved by half a point to 42.71%. Average values were up by £98 (1.0%) compared to March 2014, although performance against CAP Clean declined by just over a point.