Not long before the XC40 returned for good, Volvo asked for it back to investigate issues I’d identified with the snatchy brakes and centre console rattles. 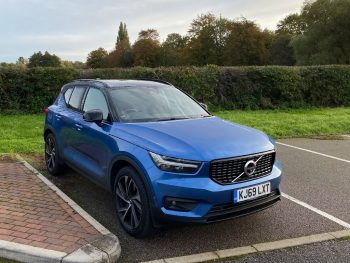 Our car returned two weeks later after some software updates

Whilst it was with them, they kindly sent me a 2020 model year XC40 R-Design to keep me mobile.

The 2020 car made an interesting comparison; although built in the same year, our car already felt a bit dated. Much of the R-Design badging has been replaced by the new ‘Recharge’ branding that will be used on all electrified Volvo models moving forward.

In terms of the drive, it was much the same, although interestingly brake feel was slightly improved and seemed less likely to trigger the ABS on bumpy roads. The fact this car was fitted with smaller 19-inch wheels might have made a difference – it was definitely a more comfortable drive.

Our car returned two weeks later with what I was told was ‘software updates’. Did they work? I would say the changes had improved our XC40, rather than solving the problem. The brakes were easier to modulate, but there were still instances where the ABS cut in alarmingly.

Sadly, the creaky centre console was no better, with me often turning up the excellent optional Harman Kardon sound system to drown it out.

Brake and build quality issues aside, I really enjoyed my four months with the XC40. It looked great, offered a refined drive and the hybrid system brought about real savings at the pumps, especially considering the considerable 262hp performance.