The UK’s easing of lockdown conditions enables Natalie Middleton to get to grips with the Combo Life. 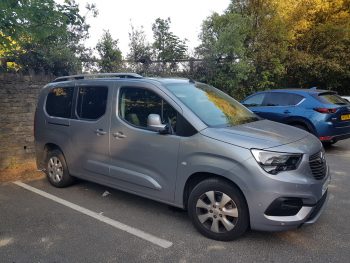 A trip to Bournemouth spotlighted the Combo Life’s lifestyle credentials

As lockdown conditions eased, it’s been this month that I’ve had an epiphany with the Combo Life’s capabilities and where it’s best suited.

Said epiphany happened one evening on the outskirts of Bournemouth following a late-afternoon trip with the kids to a quiet beach. The toilet had been opened but closed at 6, leaving me having to get the kids changed back in the car. Normally such a thing would be a tight squeeze involving some contortion and ducking down, but the Combo Life made it a doddle, helped by the rear sunblinds as part of our option (£300) child pack. But I also really took on board the car’s ‘lifestyle’ credentials after suddenly having a flashback to a test of former sister model, the Fiat Doblo, some 13 years ago. I’d taken the model, complete in bright yellow, to an adventure sports festival where friends, including surfers, had said they’d welcome it as a budget form of transport for surfing or kayaking trips.

It’s something that’s a key feature of the Combo Life’s promotional materials, which highlight accessories such as roof carriers for boxes or bicycles or other attachments to carry skis/snowboards, surfboards or kayaks. The Combo Life has also got four lashing eyes in the boot so that luggage can be secured. We’ve also got a 230V socket fitted at the front just up from the passenger footwell, not far from the 12V standard one.

It’s also designed very well for family life – including the middle-row seats which can accommodate three child seats next to each other, thanks to the ISOFIX attachments or standard three-point belts.

It’s not a car that’s going to win approval from everyone, particularly SUV fans, but it’s also one that shouldn’t be overlooked in the search for well-priced and family-/lifestyle-friendly transportation.