There may be a limited company car user-chooser market for the Combo Life, but drivers are likely to get two nice surprises once they’re behind the wheel, says Natalie Middleton. 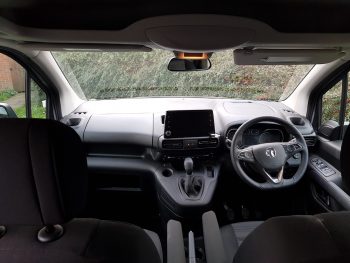 There’s a lot of equipment onboard the Combo Life

The first is the ride. Along with its Citroën Berlingo and Peugeot Rifter siblings, this van-based MPV is based in part on the same EMP2 platform as the Peugeot 3008 and it’s certainly more comfortable and soft-riding than you’d expect. It’s also surprisingly nimble round town, helped by an impressively small turning circle of 11.8m, while the 100hp 1.5-litre turbo diesel is capable, even on motorways, although we’ve not tried it fully laden.

The other nice surprise is just how non-basic the equipment is. Our mid-range Energy comes with niceties such as an eight-inch colour touchscreen, auto wipers and a fast-reacting high beam assist plus a wealth of safety features. We’ve also got some £2,835 of extra kit, including head-up display, panoramic rear view camera and parking sensors, bringing the price to £26,500, but still cheaper than many seven-seat rivals.