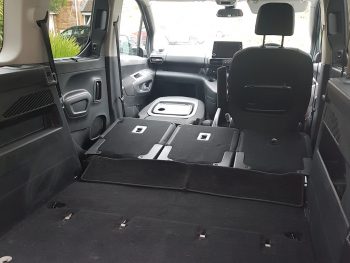 With the third-row seats removed and the middle-row and front seat folded down, the Combo Life is cavernous

There’s not many truly cool MPVs around, I guess it’s kind of an oxymoron, but the Combo Life is maybe not the car for the highly image-conscious. Which is a shame as such drivers will miss out on a wealth of practicality and value for money.

When offered the chance to test-drive the car, I knew it wasn’t high in the image stakes. But that wasn’t a priority for me. So it did surprise me when an acquaintance, one of the mums at my son’s school, saw me with the Combo Life in the car park and said, “Ooh, I bet you hate that.” They drive an original campervan and a succession of high-end and high-specced superminis and I know image is important to them, but it was a revelation that they thought it was to me.

I think they’re missing the point a bit though. Launched in September 2019, the Combo Life was, according to the PR blurb, aimed at active families and empty nesters. Other examples include those needing plenty of room for people and luggage, such as a small sports team. It was never going to meet approval from anyone with a focus on labels.

It has been recognised for its value for money since though. It was named Europe’s best value new car 2019. Other accolades since have also focused on its practicality and cost effectiveness.

And some six months into our test of the Combo Life, I continue to see past its exterior and realise the bigger picture – quite literally ‘bigger’ in the case of the Combo Life’s boot, which is not to be argued with. Also, there’s a wealth of cubbies, including overhead storage and underfloor bins.

Like the exterior, the interior doesn’t major on design either; it has an abundance of hard plastics onboard, the seats are on the basic side, with little lateral support and some of the panels aren’t close-fitting. But the van-based design brings a high seating position, a dash-mounted gearstick that’s easy to use and armrests that aid comfort while driving.

And the third row of seats are great. Although they’re split-folding, they don’t fold flush into the floor like some seven-seat SUVs. But they can be tipped up for storage or taken out altogether – which isn’t too hard at all – leaving a cavernous space. I prefer to have them folded over but ready for use as there’s still plenty of storage with them onboard. While the middle-row seats don’t slide, they do fold completely flat, so it’s just a bit of a clamber up and in use, they’re even suitable for adults, with plenty of headroom – as per the rest of the vehicle. They also have cupholders and a 12V socket on one side.