The latest addition to our long-term fleet is rather familiar, even if it only launched recently, says Natalie Middleton. 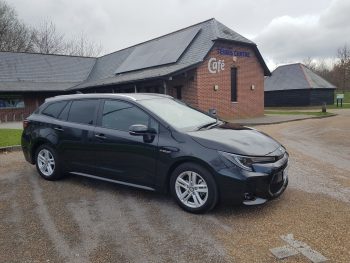 Our new long-termer only went on sale in the UK in Q4 2020 as a Suzuki, despite having been around for a while longer in different guise.

The Swace hybrid estate is based on the Toyota Corolla Touring Sports estate and is the second car to launch under Suzuki’s tie-up with Toyota; the other shared model is the RAV4-based ‘Across’ plug-in hybrid SUV that launched in November 2020.

Both models bring hybrid power – full hybrid and plug-in hybrid – to the Suzuki line-up for the first time, thanks to Toyota’s well-established and recognised tech.

In the case of the Swace, it’s only offered with one engine and bodystyle of the full Corolla range but the combo is one that’s well suited to UK drivers and businesses in general; as shown by the fact that the Corolla Touring Sports is a staple of many fleets. And the Swace is built on the same line at Toyota’s plant in Derbyshire, giving Suzuki a truly “British-built” model.

The 1.8-litre petrol “self-charging” hybrid teams up a 1.8-litre petrol with a 72hp electric motor, giving a total 122hp of power and 142Nm of torque – the Corolla’s higher-powered 2.0-litre hybrid is the unit that’s not been carried over. The Swace’s powertrain gives a 0-62mph time of 11.1 seconds and combined fuel consumption of 64.2mpg.

Rather tellingly, it’s my first hybrid long-termer; our long-term test fleet is increasingly going electrified in line with the wider trends among UK businesses and drivers.

The powertrain is married up with a CVT automatic gearbox with Normal, Eco and Sport drive modes, plus an EV Mode which can be used for short distances and is ideal for residential areas.

It’s extremely hard to tell the Swace apart from its Toyota brethren – I know because I’ve now realised just how many of the latter there are on the estate where we live and studying them go past to play spot the difference is a new hobby of mine. There’s some revisions to the front bumper and grille but that’s about it.

Price-wise, the Swace range starts at £27,499 (although there’s a current £3k discount for private retail customers) – compared to £25,755 for the Corolla Touring Sports – and there are two trims: SZ-T and SZ5.

It’s a car that I think is going to highly suit my lifestyle; from its practicality and load-carrying skills – boot space ranges from 596 to 1,601 litres – to its hybrid powertrain. With the latter technology particularly suited to urban stop/start environments – which is where I spend most of my time on the road – I’m expecting it to cut both emissions and my fuel costs; both reductions that are very much welcomed.