John Challen gets to grips with the Kodiaq’s onboard tech. 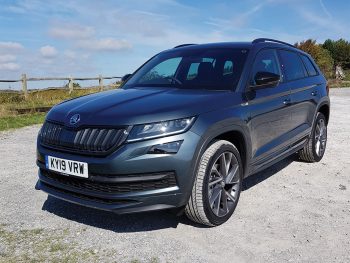 The Kodiaq is proving easy to drive around town and country

My frustrations last month with the Kodiaq’s infotainment system have receded somewhat – and I’m sure it was connected to the fact that we were dragged into the 2020s (or something) with a gift of an Amazon Echo (other home assistants are available) at Christmas. Shouting commands at an inanimate object was a bit of an alien concept to me, but I’ve quickly got used to is and now find myself doing the same in KY19 VRW.

I’m not a complete convert, but a combination of getting used to the menus and shortcuts in the system and greater use of the (very effective) voice control function makes life much easier.

On the road, the Kodiaq has mixed the usual weekly town driving with a number of trips into central London. Not the most exciting or enjoyable trips (for various reasons), but, given the space and comfort in the big Skoda, the journeys have been more than bearable.

As if often the case in the city, parking spaces are at a premium, so I was quite pleased with myself that I squeezed the big motor into a gap with just centimetres either side. Albeit with a little (a lot, actually) help from the sensors front and back! Proof, then, that the car is big – and it is (simply) clever…