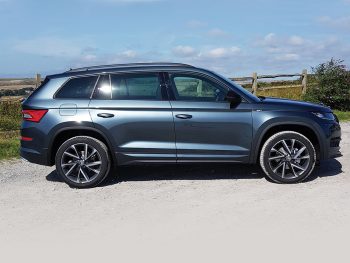 As explained in the October issue of Fleet World, one Škoda has been replaced on the fleet by another, with the outgoing Karoq making way for the bigger Kodiaq. And it really is bigger. The Kodiaq retains the humungous boot that Škodas have become famed for but, this time, there is an option of drastically reducing that carrying capacity by using the third row of (two) seats.

Partly because of its dimensions (it’s more than 4.7 metres in length and pushing two metres wide), getting into parking spaces is also a little more of a challenge. But that is probably partly down to user error – there is no rear camera, just sensors (I know, I know – first world problems and all that!).

But it certainly looks the part and those extra two seats have already been put to good use a few times – the passengers in the third row had enough room, but the moveable second row means there is a bit more flexibility, if required. The Kodiaq is a really comfortable car – the Sportline, as one might expect, comes with Alcantara ‘sports seats’ that do hug a little, but there is so much support in them that it is not an issue. There is also a whole host of standard equipment to keep driver and passengers happy, while our car has virtual cockpit (a £405 option) and – just in time for winter – heated front and rear seats (£205) and heated windscreen and washer nozzles (£340).

Because of its size, the Kodiaq isn’t the quickest car off the mark and there is a noticeable lag between throttle input and the engine engaging but once on the move it is quiet, the ride is very compliant and it’s returning decent fuel economy so far.