By John Challen / 2 years ago / Road Tests / No Comments

John Challen gets onboard with Skoda’s marketing for his latest long-term Karoq test report. 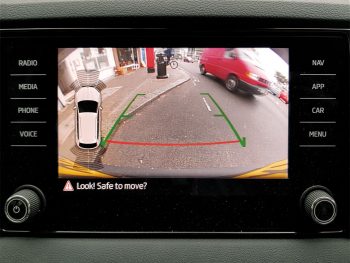 The clear and effective rear view camera comes as standard

I’m not normally one to get taken in by brand-building exercises or snappy slogans thought up by a marketing department, but Skoda’s ‘Simply Clever’ is one I can relate to. I’ve mentioned last month about the value of the common sense additions dotted around the car, – the ‘mobile boot dividers’ specifically – but on a general level, the Karoq is a very capable, yet straightforward vehicle.

For example, in a world seemingly intent on maximising efficiency, I’m delighted to report that this five-seater comfortably transported five people on a c.600-mile trip to Tenby and back in the Easter holidays. A deceptively huge boot ensured luggage for five was packed in with ease, while there were few complaints from the junior Challens (apart from being hungry – not much the Karoq could do about that) on the four/five-hour journeys to/from Wales. I’ve always said that a family doesn’t NEED a seven-seat and the Karoq proves the point.

Something else that surprises a lot of people is the level of standard equipment – the clear and effective rear view camera being one such addition. Many passengers are surprised to see it in this type of vehicle, but it’s just another feather in the Karoq’s cap.