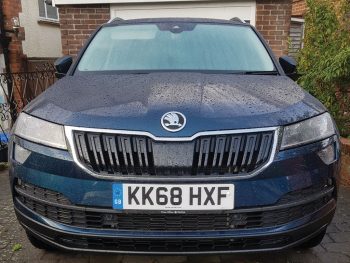 The 1.5-litre TSI in our Karoq provides smooth power delivery

My mother-in-law (no, it’s not the start of a joke, thankfully) thinks that the Škoda Karoq is the most comfortable car she’s ever sat in. Quite a compliment and I can see where she’s coming from as those micro-suede seats provide plenty in the way of cushioning and support.

Another observation this month – while taking advantage of some quieter dry roads during evening drives – is the beauty of opening up a Volkswagen Group TSI engine. I know they’ve been around for a long time now, but they are every bit as good as they were when the first turbocharged stratified injection units appeared in 2005.

In the case of the Karoq, the 1.5-litre TSI’s power delivery is smooth, but with a kick when you need it. With 150hp, it’s never going to be the quickest in its class – and that’s certainly not what small SUV buyers have at the top of their wish list, I’m sure. But when required, you can put your foot down and the Karoq really moves. I know that diesels have, until relatively recently, been famed for their fuel economy and that petrol-fed cars don’t have quite the level of torque of a similarly powered oil-burner, but a jaunt out in KK68 HXF nearly always puts a smile on my face.