Our final review on the Tarraco as it heads back home. 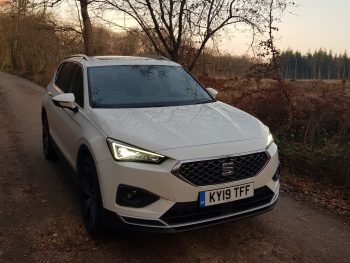 After six odd months in the Tarraco, we’ve handed the keys back; sad to see it go but now with a good understanding of how it sits in the marketplace.

It’s not got the flamboyance of the 5008 but the Tarraco is arguably more stand-out than the Kodiaq and with a decided sporty leaning in keeping with the brand. It also has a vast array of technology on our mid-spec Excellence trim that we were still getting to grips with towards the end of our time. The last few months saw me playing with the choice of views on the reversing camera, and making the most of the AmazonAlexa-powered voice command system (which works pretty well with just the odd hiccup) and the Seat Drive Profile, which offers Normal, Sport, Eco and Individual settings but is lacking the off-road and snow functionality seen on four-wheel drive models. I even got used to the adaptive lane guidance.

A drive down a dirt track to an activity centre in Beaulieu proved a fitting swansong and saw the SEAT once again hold its own, coping with bumps admirably – particularly compared to the rival SUV that my friend was following us in – and showing how the Tarraco, along with its Kodiaq sibling, is particularly well composed on rougher terrain. Its refinement and comfort on long-distance for cruising were also appreciated.

The Tarraco is also a car that majors on practicality. Slightly lower on boot capacity than its two rivals, it’s still competitive for the sector and offers extensive space. As with its counterparts, the third-row seats are best left to occasional use for adults but fine for nippers who don’t mind a bit of a clamber in.

My kids have also been particularly appreciative of its looks, including the Audi-style rear indicators, the light bar effect across the back and the blanked-out exhaust trims, plus the denim-effect interior upholstery.

Above all, it’s taken all my family can throw at it over the months (including not just a few Chupa Chups) and remained looking pristine.

Late to the large SUV party then but top of the A-list.

Previous: Today in Fleet – Friday 17 January
Next: Bath to push ahead with Clean Air Zone charges on vans