The latest seven-seater SUV to arrive on our test fleet, the SEAT Tarraco has been very much welcomed, says Natalie Middleton. 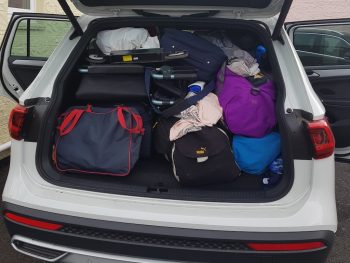 The SEAT coped well with the annual Middleton family holiday

Having driven the Peugeot 5008 and Škoda Kodiaq over the last two summers, I’ve relished the chance to get behind SEAT’s recently launched rival to them to see how it fares. And from the styling to the handling it does not disappoint.

Even from the outside – and the moment you step in – it’s apparent that SEAT has injected a great deal of its brand DNA into this model. The interior might not be as avant-garde as the 5008’s and, as with the Kodiaq, it’s a little on the dark side but it’s definitely one that SEAT aficionados will appreciate, including the 10.25-inch digital cockpit instrument panel. I also like the ‘floating’ tablet-style infotain- ment screen – which brings a wealth of features that I need to find a quiet moment to explore – although its positioning is a bit divisive.

Its arrival with us has also been well timed in terms of the annual Middleton family holiday, which always sees long termers put to the test with a veritable arsenal of luggage, from wheelchairs to toys and even a TV. The SEAT did well although I was left wondering how I had managed to fit an extra wheelchair in sister model, the Škoda Kodiaq, two years ago. But a comparison of the figures shows there’s an extra 20 litres in the Škoda with the second-row seats up and the third row folded (720 versus 700) while the Kodiaq boasts 2,065 litres with both rows folded compared to the Tarraco’s 1,775.

Nonetheless, our latest long termer remains competitive in the sector for practicality – and with a dash of SEAT flair overall.