The Renault Clio brightens up our long-term fleet. Luke Wikner reports back on its first few weeks in service. 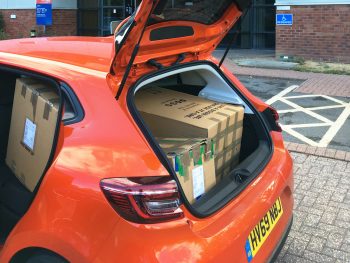 Valencia Orange! It’s a statement colour and one that suits the new Clio down to the ground. The ‘hidden’ rear doors have always been a nice design feature and Renault’s latest supermini now has a face more in line with the rest of its model range siblings. It looks terrific and this surely has to be half the battle in securing both downsizers and drivers who simply don’t need extra space, but value their own flexible mobility.

In the first few days of my custodianship, it turned out I did need the extra space. One of the largest fleet growth areas in the last couple of years – home delivery/collection – has been accelerated by these unprecedented times, but the extra demand has also put more strain on the logistics companies, which resulted in two failed pick-up attempts for items heading to storage. The solution? Cram everything into the back of the Clio and take it to the depot. Admittedly, two trips were required but only because (annoyingly) one small box wouldn’t quite tessellate into the space. For a supermini, there’s a surprising amount of useable cubic capacity though.

Also, one of the principal benefits of a smaller car with a lower list price is the cost saving. The relatively low OTR price of £16,295 (or £18,105 with the additional extras our model has), in addition to a BiK tax rate of 26% for the 2020/21 tax year, means that a 20% tax payer will be paying around £73 per month for the benefit. The WLTP-rated mpg figure of 54.3mpg underlines how efficient petrol-powered superminis are these days and this appears to be a realistic figure in day-to-day driving as well… but we will see how it fares with more varied journeys in the future and the escalation of traffic as life slowly gets back to (the new) normal.

100hp from the 1.0-litre unit proves more than adequate for daily driving, and the extras our Clio has, such as automatic headlights/ wipers and a reversing camera, give the car a big car feel. More on those next month…