Dan Gilkes heads behind the wheel of our long-term 508 SW. 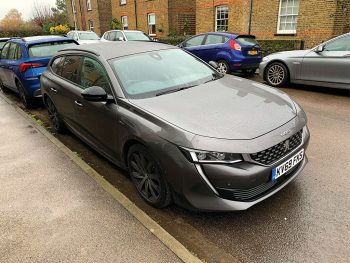 As a fleet car, we’ve gone with the lower-powered 1.5-litre oil burner, which kicks out 131hp and a healthy 300Nm of torque. If that sounds like the short straw, it’s definitely not. The compact diesel has plenty of pulling power and a relaxed cruise at motorway speeds, easily carrying four adults and luggage on a post-Christmas trip from Suffolk to the Sussex coast and back. We went with the eight-speed auto box, which is incredibly smooth. It comes with a sport setting and with paddles for manual gear changing, but neither seems to improve on the standard settings.

Our car is in sporty GT Line trim, raising the already generous standard specification higher. All 508s also get Peugeot’s ‘love-it or hate- it’ i-Cockpit, with tiny steering wheel and high-mounted dash, which thankfully works well for me in this iteration.