Do the changes to the latest Mitsubishi Outlander PHEV keep it ahead of the pack? Alex Grant’s first report on our new long-termer. 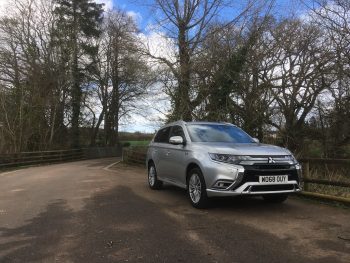 The 2010s will likely be remembered as a decade of unre-lenting change for the automotive industry, and particularly as the era where electric mobility moved from quirky city cars to mainstream, versatile products. And it’s hard to imagine that transition without the contribution of the Outlander PHEV.

Change has come so quickly since that it’s easy to forget how forward-thinking this was in 2014. The first UK cars arrived in a market where 50% of registrations were diesel- powered, air quality was relatively low on the political agenda, charging networks were mostly local and EVs typically offered a range of around 100 miles. Mitsubishi’s offer was unique; a practical SUV with a tax-efficient drivetrain and usable electric range, priced to match its diesel counterparts and with no worries about range. For many company car drivers, this will have been their first plug-in – and probably their first Mitsubishi too.

Of course, a lot of those early barriers to EV ownership have broken down since, and there’s no shortage of plug-in hybrids to choose from, so Mitsubishi hasn’t stood still with its best-seller. Last year’s heavy technical update introduced a new 2.4- litre petrol engine, which can switch seamlessly between the conventional Otto combustion cycle (suited to heavy loads) and the efficiency-focused Atkinson cycle (which cuts consumption while cruising). Paired with a slight uplift in electric power output and a larger-capacity battery, this kept CO2 emissions under 50g/km despite the move to WLTP-derived fuel economy figures.

Brochure figures aside, this should make what was already a mainstream car even more viable as an alternative to petrol or diesel power. So we’ll be spending the next few months getting to grip with that technology, tasking it with the sort of mixed usage drivers would throw at a conventional SUV to see whether it’s still ahead of the pack.