Our new long-termer may be small but it’s by no means diminutive. Craig Thomas takes to the roads to test it. 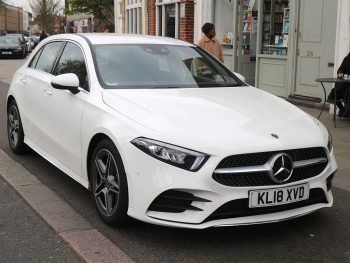 Despite the almost ubiquity of SUVs of all sizes these days, the humble hatchback is still, as the kids say, a thing.

Carmakers are producing new generations of faithful old models – especially in the profitable premium sector, where we’re due a new BMW 1 Series and Audi A3 this year.

Mercedes-Benz has stolen a march on its German rivals, however, by launching its third-generation A-Class last year. The A-Class is one of Merc’s most important fleet cars, so it’s a prime candidate for a Fleet World long-term test, provid- ing a useful benchmark of the segment as we await its rivals.

When discussing the specification with Mercedes, it emerged that the first tranche of orders for the new A-Class resulted in petrol cars being the most popular among fleet buyers, so we’ve opted for an A200 model, powered by a 1.4-litre, 163bhp unit, mated to a seven-speed dual-clutch automatic gearbox. First impressions are that it’s a bit rev- hungry, with a penchant for holding on to the gears for longer than you’d expect (or want). This is especially notice- able around town and, as a result, fuel economy isn’t great. However, we’ve managed to take the A-Class on a few longer motorways runs and been able to get 49mpg, which is better than the official (WLTP) fuel consumption figure. We’re interested to see how this develops.

Indeed, there already seems to be a strong argument to see the A-Class as two cars, with the ride quality also having a form of duality. On a motorway run, it’s very comfortable, soaking up expansion joints, for example: in town, however, the low-slung chassis doesn’t like speed humps, requiring slowing down to just over 10mph if you want to avoid that tell-tale scaping sound. And there are lots of speed humps where I live in south-west London.

The A-Class’s fleet tenure is already proving to be very interesting.